Long Life Essays and Other Writings

By Mary Oliver
Contains little alleluias to the bounties of nature, animals, the soul, place, and literature.

In this sterling collection of prose pieces and a few poems, the Pulitzer Prize-winning poet Mary Oliver salutes and celebrates many of what she calls "the little alleluias" in her days and in her doings. She admits that given the choice, she would always prefer to write poems over prose. But for both endeavors, she needs to be attentive, alert to all the quiet whispers in the dark, and the bright shiny slivers of meaning out there in the burning sun. As she puts it: "for always the new self swimming around in the old world feels uniquely verbal. And that is just the point: how the world, moist and bountiful, calls to each of us to make a new and serious response." Mary Oliver's imagery, as usual, is fresh as mint and always delivers something worthwhile to savor.

Here, for example, she ponders the value of rituals of repetition: "Men and women of faith who pray--that is, who come to a certain assigned place, at definite times, and are not abashed to go down on their knees-will not tarry for the cup of coffee or the newsbreak or the end of the movie when the moment arrives. The habit, then, has become their life. What some might call the restrictions of the daily office they find to be an opportunity to foster the inner life. The hours are appointed and named; they are the Lord's. Life's fretfulness is transcended. The different and the novel are sweet, but regularity and repetition are also teachers. Divine attentiveness cannot be kept casually, or visited only in season, like Venice or Switzerland. Or, perhaps it can, but then how attentive is it? And if you have no ceremony, no habits, which may be opulent or may be simple but are exact and rigorous and familiar, how can you reach toward the actuality of faith, or even a moral life, except vaguely? The patterns of our lives reveal us. Our habits measure us." We've read many spiritual writers on divine attentiveness but this description hits the mark with style and pizzazz. Later on, in just one line, Oliver does it again: "You, too, can be carved anew by the details of your devotions."

We cherish this poet's appreciation of animals, and there are abundant descriptions of them in these pieces. Whether writing about an elephant's eye, the softness of the fur behind a mouse's ear, a missing in action hummingbird, the grasshopper bounding along the road, or her own dogs, Oliver opens our hearts to these creatures and their special gifts. There are also some pensive essays on William Wordsworth, Nathaniel Hawthorne, and Ralph Waldo Emerson. We conclude with one of the best little alleluias in this collection, a poem titled "The Morning Walk":

There are a lot of words meaning thanks.
Some you can only whisper.
Others you can only sing.
The pewee whistles instead.
The snake turns in circles.
the beaver slaps his tail
on the surface of the pond.
The deer in the pinewoods stamps his hoof.
Goldfinches shine as they float through the air.
A person, sometimes, will hum a little Mahler.
Or put arms around old oak tree,
Or take out lovely pencil and notebook to find a few
touching, kissing words. 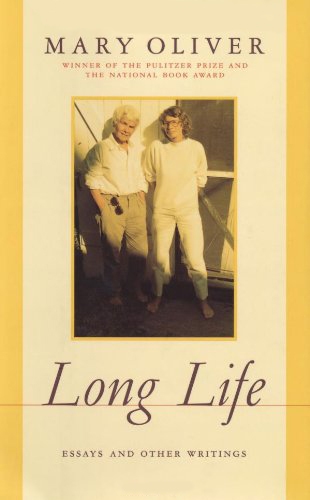