By Sam Keen
A watershed work on the intertwining of enmity, propaganda, and warfare that urges us to find an alternative to the idea of redemptive violence and the warrior mythology.

In a Nutshell
This bellwether work by Sam Keen challenges us to examine the psychology behind enmity and war, the myriad ways in which we dehumanize enemies through propaganda and bigotry, and the path of compassion and kindness which offers a way out of the terrible cycles of violence that have been passed down from generation to generation. This out-of-print paperback (still available in libraries or from Amazon and other used book dealers) contains an extraordinary collection of propaganda posters, biased cartoons, and hate-filled images that have appeared in print and on the screen to justify war and hatred of the enemy in a variety of historical contexts.

About the Author
Sam Keen is a graduate of Harvard Divinity School and holds a Ph. D. in philosophy of religion from Princeton University. He was for many years a consulting editor of Psychology Today and is the author of 13 books including the bestseller Fire in the Belly. He has conducted trapeze workshops at the Omega Institute and at his farm in Sonoma, California. Keen is a contributing editor to Spirituality & Health.

Sum & Substance
The hostile imagination assumes that the stranger, an outsider, poses a threat to us and intends evil. When nations find themselves in trouble either economically or politically, they swiftly find a scapegoat to blame. This enemy is then painted as a barbarian, a dehumanized monster who must be fought and exterminated. The ancient game of good versus evil is set in motion. The face of the enemy is there to provide a target for our hatred. Keen quotes Ernest Becker who says,"If there is one thing that the tragic wars of our time have taught us it is that the enemy has a ritual role to play by means of which evil is redeemed. All wars are conducted as 'holy' wars in the double sense then—as revelation of fate, a testing of divine favor, and as a means of purging evil from the world."

If we yearn for peace, then the public in general and individuals in particular must confront our shadows and deal with the various ways in which we project our selfishness, greed, and violence onto others. This would mean that the United States must come to terms with its consensual paranoia and the myth of redemptive violence. Men and women must begin to confront their own bloodlust and the civil war within themselves. Even more importantly, we must find an alternative to the warrior myth which so animates our public and private lives.

In the closing pages of this paperback, Keen offers a curriculum of compassion, "The Education of Homo Amicus." He lays out key subjects to be covered including the study of peace, the toxins of paranoia and propaganda, the clash between authority and individual conscience, the nature and use of power, the myths and rituals of compassionate living, the cultivation of listening and empathy, the practice of conflict resolution, and the inner work that must be done on the enemy inside each of us, and more.

Quotes to Go
"The problem seems to lie not in our reason or our technology, but in the hardness of our hearts. Generation after generation, we find excuses to hate and dehumanize each other, and we always justify ourselves with the most mature-sounding political rhetoric. And we refuse to admit the obvious. We human beings are Homo hostilis, the hostile species, the enemy-taking animal. We are driven to fabricate an enemy as a scapegoat to bear the burden of our denied enmity. From the unconscious residue of our hostility, we create a target; from our private demons, we conjure up a public enemy. And, perhaps, more than anything else, the wars we engage in are compulsive rituals, shadow dramas in which we continually try to kill those parts of ourselves we deny and despise."

"War is always reactionary, a drama in which two or more parties, who feel themselves powerless to do anything except respond to the aggressive initiative of the other, seek to demonstrate their superior potency."

"The first rule for discovering the treasure hidden in images of the enemy is this: Listen to what the enemy says about you, and you will learn the truth you have repressed. To come to greater self-understanding, borrowing the eyes of the alien, see yourself from afar. Let the familiar become strange and the strange familiar — the two rules of creativity. Look with suspicion on the rhetoric of your nation and listen with compassion to the reasons of the enemy . . . Repent. Change perspectives. Give your eye (your I) a vacation. Try on a different head. Turn your paranoia inside out; practice metanoia."

"Unless we discover civility and create new institutions to tame our greed and gentle our anger, every advance in technology will bring us nearer to barbarism and cosmocide."

"Our best hope for remaining human, and remaining alive for the generations it will require to convert our disposition toward hostility to a disposition toward kindness, is to devote the full energy of our imagination and will to finding a way to live in relative harmony with our neighbors. For the time being, it is good enough if we can manage to avoid unnecessary battles and to place limits on the weapons with which we keep each other hostage to terror. And when we must fight, it must not be as holy warriors but as deeply repentant men and women who are caught in the tragic conflicts of history that we have not yet had the vision, the will or the courage to change." 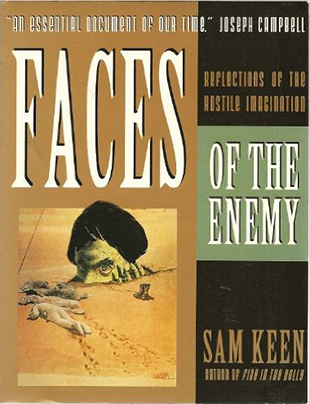