By Carl Honore
An incisive overview of this important cultural phenomenon.

We live in a culture where people salivate over fast cars, fast food, fast service, and fast talk. But this cult of 24/7 speed is catching up to us in ways that signal danger: Americans work more hours than the Japanese and Europeans; on average Americans fail to use a fifth of their paid time-off every year; job stress causes a million Americans to miss work every day; children as young as five are now suffering from stress-related illnesses; the average American gets 90 minutes less sleep a night than a century ago; fatigue has contributed to some of the world's worst disasters including Chernobyl, Exxon-Valdez, and Three Mile Island; 73 percent of adolescents said in a 2000 Newsweek poll that their parents spend too little time with them.

In this superb and eminently readable volume, Carl Honore, an award-winning journalist, charts the growth of the Slow Movement which began in Italy with Slow Food and has progressed to other aspects of contemporary living in countries around the world. A self-described recovering "speedaholic," Honore has taken a close look at slowness as a way of decelerating the intense pace of our lives.

The Slow Food movement, which now has 78,000 members in over 50 countries, advances the causes of seasonal produce, sustainable farming, and leisurely dining. Many communities are trying to slow things down by cutting noise and traffic and promoting technology that protects the environment. In the mind-body arena, more people are turning to holistic healing traditions and practicing wellness regimes such as yoga and Pilates. Employers around the globe are looking at France's experiment with a 35-hour work week. Many educators now emphasize a slower pace for children in both education and extracurricular programs. And in leisure pursuits, the slow-is-beautiful movement is gaining momentum is such activities as knitting, gardening, and reading.

Of course, the world's religions and spiritual teachers of all stripes have advocated the benefits of meditation, silence, and retreats as ways to heal the body, mind, and soul. Carl Honore has written an incisive overview of an important cultural phenomenon. 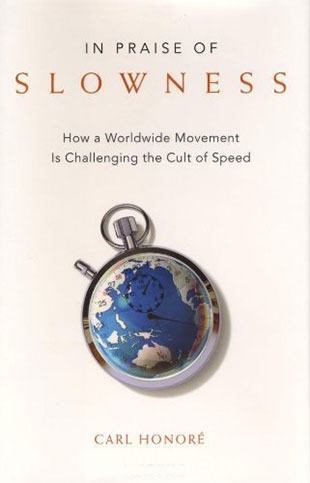