The Working Poor Invisible in America

By David K. Shipler
A harrowing portrait of the plight of the millions of men, women, and children who are struggling just to survive with dead-end and low-paying jobs.

More than 35 million Americans live on incomes below the poverty line, an amount difficult to figure given regional differences and the variety of federal measurements. David K. Shipler, author of Arab and Jew: Wounded Spirits in a Promised Land, which won a Pulitzer Prize, has now spent five years following 15 individuals for this ambitious work of social criticism. The people here are not lazy, shiftless welfare cheats but white, black, Latino, Asian, and other Americans who are working in low-paying, dead-end jobs that will never give them a chance to improve their status in the marketplace. Here are farm workers in North Carolina, garment workers in New Hampshire, and immigrants in Los Angeles restaurants. Each day they struggle against staggering odds just to keep bread on the table.

According to Shipler, many of the working poor are just a step away from catastrophe. A brief illness, trouble with their car, or disrupted child care can bring about the end of their employment. Anger and disappointment are widespread among these individuals whose perilous economic hardship means that they cannot save, are often unable to get proper health care, cannot move into better neighborhoods, and cannot send their children to good schools. Shipler states: "These are the forgotten Americans, who are noticed and counted when they leave welfare, but who disappear from the nation's radar as they struggle in their working lives."

The desperate plight of the working poor is exacerbated by the growing gap between the rich and the poor with a median net worth of $833,600 among the top 10 percent and just $7,900 for the bottom 20 percent. And although there are plenty of movies and TV shows about the affluent, where are the dramas that chart the heroic struggle of these individuals to survive? One reason they remain invisible is that many Americans blame the poor for their plight and prefer not to be reminded of them. The myth of upward mobility, which promised everyone a chance to make it big, isn’t even mentioned anymore in a country where big corporations and the rich control the government. Where are the lobbyists for the working poor? Who is speaking up for this large constituency that still has no voice in the public arena?

Shipler delves deeply into the obstacles facing the working poor. They face the intertwined problems of dead-end and low-paying jobs, decaying housing, lack of health care, poor education, few job training programs, insensitive and cruel employers, hunger, malnutrition, junk food diets, miniscule bank accounts, and widespread depression and hopelessness. He concludes: "Workers at the edge of poverty are essential to America's prosperity, but their well-being is not being treated as an integral part of the whole. Instead, the forgotten wage a daily struggle to keep themselves from falling over the cliff. It is time to be ashamed." 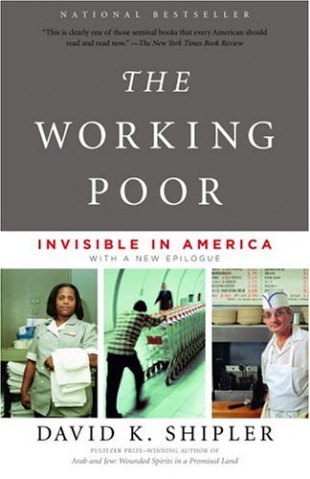