Healing Israel/Palestine A Path to Peace and Reconciliation

By Michael Lerner
Raises a wise voice on the conflict between Israel and Palestine.

What a blessing it is to hear a wise voice on the conflict between Israel and Palestine! Rabbi Michael Lerner is the co-founder of Tikkun magazine and author of many books including Spirit Matters and The Politics of Meaning. His experiences as a psychologist, philosopher, and rabbi give this bold and balanced work a spiritual dimension that has been lacking in other treatments of the cycles of hatred, pain, mutual indifference, and cruelty that have characterized the relationship between the Israelis and the Palestinians. It is good to remember that Lerner was mentored by Abraham Joshua Heschel and ordained by Rabbi Zalman Schacter-Shalomi. He calls his proposal for a path to peace and reconciliation "a progressive middle path" that is pro-Israel and pro-Palestinian. Lerner brings a spiritual maturity to this issue that demonstrates the practices of openness, listening, generosity, nonviolence, and justice.

He begins in a laudable way — by avoiding demonization as he recounts the history of the region. If more journalists used this kind of background statement, it would be much easier for people to understand the underlying issues and the need for healing. Here's part of Lerner's summary:

"From 1880 to 1950 the Jewish people jumped from the burning buildings of Europe. We jumped not because we wished to, but because of a legacy of hate that culminated in our being the victims of genocide. And we landed on the backs of Palestinians. The Palestinians and the Arab people of the Middle East were in the midst of a struggle to free themselves from colonial powers, and were afraid of the Zionist dream of the creation of Jewish state right on top of their own fledgling Palestinian society. . . .

"The Palestinians used acts of violence and the influence of Arab states with the British to deny Jews a refuge. Their insensitivity to the Jewish people and our needs helped create a dynamic in which Jews actually became what the Palestinians had feared: a group that would cause Palestinians to become refugees. . . .

"But from the standpoint of the Palestinian people, the pain they suffered at our hands was very real. Yet, because we are still so traumatized by our own pain, we Jews still have difficulty acknowledging that we have caused any pain to the Palestinians, just as Palestinians continue to be unable to acknowledge the pain they caused to the Jewish people when it was we who were the powerless and the homeless. That denial on both sides has made it impossible for each of us to talk honestly to each other, or to find a path to heal the wounds. Neither of us can acknowledge the pain we caused each other, and instead, we continue to inflict new pains that intensify the old. For decades Israel has ruled over the Palestinian people, and as Palestinians responded to that Occupation with armed struggle and acts of terror against Israeli civilians. Israelis have increasingly used methods to secure the Occupation that violate international standards of human rights and make a mockery of the highest values of the Jewish tradition. Both sides act in ways that are cruel and insensitive to the other."

After tracing the struggles of the Christian oppression of the Jews and the Jewish responses to modern European anti-Semitism, Lerner conveys the deep Jewish yearning for a homeland after 1800 years of statelessness and the scourge of the Holocaust. He then presents the Zionist enterprise and its impact on the Palestinians. Here is where Lerner fills in the spaces for those of us who know little about Arab history and traditions. For example, here is an empathy practice. Imagine that the time in 1917 just after the Balfour declaration whereby the British elevated Jewish interests over the interests of Palestinians:

"Imagine yourself living in a village whose agricultural lands have been worked for generations by your family and the families of your small community. Then one day someone arrives to tell you that he holds a piece of paper that indicates that he has bought all the land of your village and that you must move. To where? How will you and your family make a living? The land has been bought by 'the Jewish people' and it has been bought from some absentee landlord whom you've never seen and maybe never even heard about. And you hear that this is happening to others around your country The Jewish people are throwing you off your land and putting your family and the families of many others into crisis. How would you feel?"

Other chapters cover the emergence of a Jewish state after the 1948 war and difficulties sustaining peace under different Israeli governments. Lerner's strategies for healing and reconciliation are outlined in a chapter on The Tikkun initiative for Middle East Peace calls for ending the oppression of the Palestinian people and ensuring Israel's survival and security and eliminating terror as a daily reality in the country. One important goal, which is not seen in most proposals, is to correct assumptions about the two religions associated with the conflict. Lerner wants to make sure that in the eyes of Jews and non-Jews, Judaism is not wrongly identified with insensitive or immoral Israeli policies. And he wants the people of the world to know the compassionate and peaceful foundations of Islam and challenge those who wrongly identify it only with Islamic extremists and suicide bombers.

There is much more in the book than we can note here. Suffice it to say that Lerner has done his homework and reached out to the many voices in this conflict. In the closing pages of this paperback, he answers hard questions and presents a fine collection of resources for peace. To read more about the Tikkun community's initiatives and to get involved, visit their website www.tikkun.org. 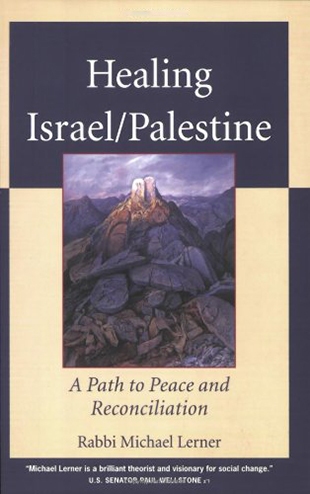