Desert Father A Journey in the Wilderness with Saint Anthony

By James G. Cowan
Presents the author's quest to learn from the ascetic practices of a fourth century hermit who was a pioneer of spirit.

In his wonderful books Letters From a Wild State: Recovering Our True Relationship with Nature (1992) and Messengers of the Gods: Tribal Elders Reveal the Ancient Wisdom of the Earth (1993), Australian writer James Cowan demonstrated his appreciation of Australian aboriginals and native seers in the Torres Strait Islands, Borneo, and elsewhere, who have much wisdom to share about the natural world, the art of listening, and the importance of rituals. The author of more than 20 books, he has traveled to Morocco, Greece, Japan, Italy, Egypt, India, and Turkey to explore remote ascetical communities.

He discovered that the impulse "to forsake the world with all its opportunities and pleasures in order to pursue a life of self-abnegation" is found in Zen monasteries, Sufi orders, and Christian monasteries. Although the fourth century desert hermit Saint Anthony wrote no books and never addressed devoted followers, he managed to pass on a system of ascetical behavior that is relevant to the present scene where many seekers are trying to access the inner stillness through silence and prayer. Cowan has written a fascinating book about his own quest to find meaning in this desert path of selflessness.

He describes the importance of Saint Anthony as a pioneer of spirit: "Early Christian asceticism was as much a political gesture as it was spiritual. Anthony had found a way to return to his origins by escaping the net altogether. By setting himself up as a lonely bastion of flesh in the desert, he served notice on how his body would in future be governed. . . . It would take a spiritual genius to fashion an alternative life. It would take an artist to recognize the desert as the perfect representation of his own loss of self. No man before him had so deliberately chosen to turn aridity into a positive value. The desert became his metaphor for being, his ageless encounter with lifelessness as a principle of rectitude. No wonder he was such a threat to Rome. This lonely man living in the desert imposed a new valuation on human endeavor: that people had the right to an inner life over and above their responsibilities as social beings. Such a premise went far beyond any that Socrates had proposed, even at his death. A new force had entered the world. By his retreat into the desert Anthony paved the way for others to take their first step on the road to selflessness."

Cowan meets Lazarus, a reclusive monk, who becomes his spiritual guide in desert asceticism. He learns about Anthony's life in caves, his battles with demons, his basket weaving, his renunciation of possessions, and his conduct as "an act of eco-centricity, a method of defining one's existence by how little one might encroach upon nature and the world." Cowan comes to see that this unlettered Greek's inner voyage can be taken by contemporary seekers who are amenable to mystery, devotion, and silence. 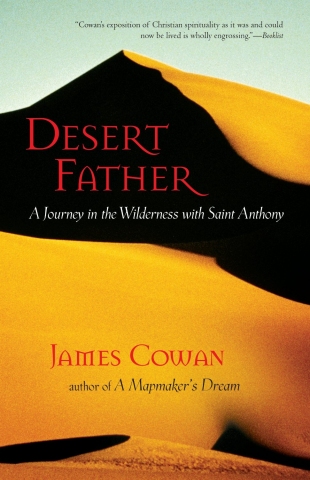