Smiles of God The Flowers of Saint Therese of Lisieux

By Felicity Leng
A deeply devotional work about the patron saint of florists and gardeners.

Felicity Leng was educated at St. Mary's Convent, Ascot, and the Slade School of Fine Art, London. In this tribute to Therese of Lisieux (1873- 1897) she presents the importance of flowers in the life and work of this saint who in 1997 was declared a "Doctor of the Church."

A neighbor's prophetic poem written on the eve of Therese's birth, ended with the line: "You will be a rose one day." It wasn't much off the mark since as a child growing up in Normandy, she was always enchanted with flowers. Legend has it that Therese's conception of herself as a flower-girl helped her overcome childhood depression. She once wrote: "God sometimes communicated himself to us in a blazing light, at other times gently, veiled in symbols and imagery." Leng examines the flower imagery in her writings and conversation paying special attention to the rose. This healing flower has been used to purify sickrooms, temples, churches, and streets.

In another writing, Therese notes: "If a little flower could talk, I think it would say quite simply what God has done for it, and not hide any of its gifts. It wouldn't say, in mock humility, that it wasn't pretty and didn't smell sweet, that the sun had withered its petals or a storm bruised its stem, if it knew all that wasn't true." It is this kind of spiritual sensitivity that has made Therese and her "little way" so appealing to ordinary people of all religious persuasions. She believed that it was the destiny of everyone to be a saint — one who was destined to grow and flower. That is why Leng concludes her insightful and deeply devotional book with an image of Therese as a smiling flower in God's garden. 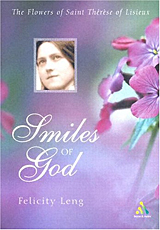