Reimagining Christianity Reconnect Your Spirit Without Disconnecting Your Mind

By Alan Jones
A masterful visionary work that presents the Christian faith as open, inclusive, justice-seeking, and practice-oriented.

"I believe that the way out of our decadence is to recover the life of the imagination and to see the religious impulse as natural to us," writes Alan Jones, dean of Grace Cathedral (Episcopal) in San Francisco, whose sermons and interviews can be found on the Webby Award-winning website GraceCathedral.org. The author of Seasons of Grace and many other books is convinced that Christianity needs to be reimagined in our times as an open, inclusive, justice-seeking, and practice-oriented faith that can speak to both believers yearning for new challenges and unaffiliated nonbelievers willing to give religion a second look as long as it moves them toward love, healing, and transformation.

The slogan at Grace Cathedral is: Reconnect your spirit without disconnecting your mind. This attitude is evident in the poignant vignettes the author shares from his spiritual journey. There are many Christianities, he notes, from fundamentalist Protestantism to papal Catholicism, from the Shakers to the Eastern Orthodox, and the walls between them are thin: "Being a Christian is a romance, a pilgrimage into the unknown, a process of continual conversion."

First and foremost, the author salutes the high and holy place of the imagination in the life of the believer. As a mystical Christian, he affirms the role of the Bible in the nurturing of faith but also sees the value of the Book of Nature and the Book of Experience. The church must find new ways for imagination to help create more empathy and compassion in a world where injustice, globalization, and selfishness keep people separate. Imagination, says Jones, can jump-start wonder and bring astonishment to our lives.

Generous quotes from novels, favorite poems, and movie commentary demonstrate the three functions of art and imagination: feeling at home everywhere, offering a cure for loneliness, and presenting new insights on reality. Jones concludes that although the Christian community has often been too enslaved to beliefs, it still has the chance to give "a new vocabulary for being more and more aware and alive" — a language of inclusion and hospitality and a lexicon of mutuality and community.

What would this new Christianity look like? Jones presents three primal images from the immense resources of the faith: Jesus the Broken Man, Mary the Pregnant Life, and Trinity Means Communion. Revealing a mystical appreciation for not knowing, he makes it clear that he would love to see more emphasis on questions than on answers.

To our delight, he singles out spiritual practice as the emphasis that will enable Christians to draw closer to other religions and to large numbers of unaffiliated individuals who have been wounded by the excesses of dogma. This is a masterful visionary work that fulfills Jones’ goal to reimagine Christianity by recovering what has been lost and presenting new possibilities. 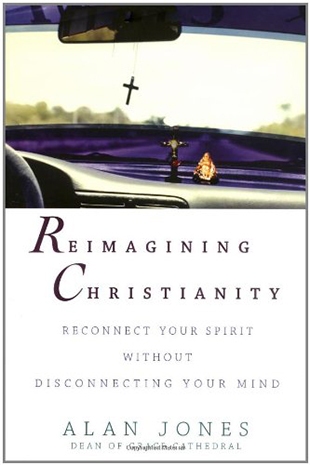