Exuberance The Passion for Life

By Kay Redfield Jamison
A lively and imaginative treatment of an elated state, a cousin to enthusiasm, happiness, and joy, that is rarely discussed in psychological literature.

"Exuberance is an abounding, ebullient, effervescent emotion. It is kinetic and unrestrained, joyful, irrepressible. It is not happiness, although they share a border. It is instead, at its core, a more restless, billowing state. Certainly it is no lulling sense of contentment: exuberance leaps, bubbles, and overflows, propels its energy through troop and tribe. It spreads upward and outward, like pollen toted by dancing bees, and in this carrying ideas are moved and actions taken." This is the best — and maybe even the first — definition of exuberance we've read. We usually hear more about its companions: enthusiasm, happiness, and joy. Author Kay Redfield Jamison, professor of psychiatry at Johns Hopkins School of Medicine and a John P. and Catherine T. MacArthur Fellow, has written widely about mood disorders, creativity, and psychopharmacology. Noting that much time and energy has been given to the study of depressive states and very little to elated states, she seeks to redress the balance.

She begins with profiles of Theodore Roosevelt and John Muir, two robust men who were exuberant about the glories of the natural world. They used their considerable energy to touch millions with their visions of the wonders and diversity of the good Earth. Wilson Bentley, a New England farmer who found snowflakes to be "miracles of beauty" with no two ever being alike, also exhibited this character quality. Nature, with its lushness and abundance, is living proof of exuberance. One pair of poppies, given seven years and the right conditions, will produce 820 thousand million million million descendents.

In our time, exuberance usually means "a mood or temperament of joyfulness, ebullience, and high spirits, a state of overflowing energy and delight." Jamison sees play as a characteristic of exuberant people. Studies have confirmed that animals derive pleasure from spontaneous activity and that children often express their creativity through play. In one of the most lively chapters, the author salutes such fictional characters such as Toad in The Wind and the Willows, Tigger in The House at Pooh Corner, Mary Poppins, Peter Pan, and Snoopy in the cartoons of Chares Schultz. They tutor us in the art of bouncy animality, letting ourselves go, experiencing enchanted escapades, and celebrating all the marvels of life.

Not everyone can be exuberant, Jamison says. Differences in temperament stem from genetics and brain architecture and chemistry. Many who met Franklin D. Roosevelt and Winston Churchill thought that being in their presence was the equivalent of a fireworks display or opening a bottle of champagne. Louis Armstrong's personality produced exuberant music. Scientists are manifesting this quality when they are engaged in exploration and discovery. The same capacity is found in teachers who are able to inspire others to learn. But there is also a shadow side to this heady mood: "Enthusiasm shares a border with fanaticism, and joy with hysteria; exuberance lives in uncomfortable proximity to mania."

Jamison's exquisite prose carries us through this thought-provoking book as if we were surfing on splendid waves — the moments of inspiration just keep coming. This is one of the best books of 2004. 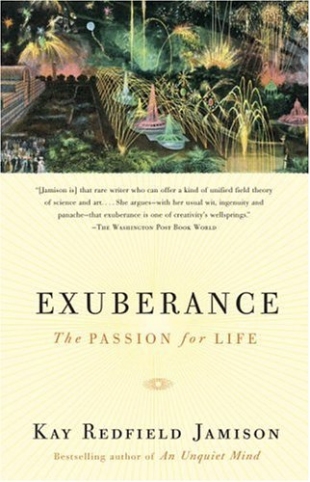