By Marilynne Robinson
An enchanting novel about an elderly Congregational minister and the legacies and memories he wants to pass on to his seven-year-old son.

In A Nutshell: This beautifully written novel is set in 1956 when John Ames, a third-generation Congregational minister, has decided to write a long, memory-filled letter to his seven-year-old son. At seventy-six years, this reflective man has been diagnosed with angina pectoris and doesn’t have very long to live. John wants to pass on the faith that has filled his life with meaning, the love that has sprung from his second marriage to a serious young woman, and the forgiveness that has been a challenge to several generations in his family.

About the Author: Marilynne Robinson teaches at the University of Iowa Writers' Workshop. She is the author of two books of nonfiction, Mother Country (1989) and The Death of Adam (2000), and the modern classic Housekeeping (1981) — a novel that won the PEN/Hemingway Award. It was made into a movie directed by Bill Forsyth in 1987.

Sum and Substance: John Ames, the narrator of this epistolary novel, is a sensitive and intelligent country minister in Gilead, Iowa. He wants to share with his young son important bits of family history. One of his fondest memories is of a month-long journey with his father to find his grandfather's grave in Kansas. The two men did not hit it off very well: one was a violent abolitionist who was connected with John Brown and the other was a pacifist. John sees this fissure of father and son repeated in the life of his best friend, Old Boughton, Gilead's Presbyterian minister. When his son Jack returns to town, this former prankster seeks out John Ames for counsel and advice. He wants to know what the minister thinks of predestination. Suddenly, Ames finds himself assessing his negative feelings about Jack and wrestling with the meaning of forgiveness. The final meeting between the narrator and this prodigal son is capped with a deeply spiritual event that demonstrates the remarkable healing power of certain Christian rituals.

What is so wonderful about this novel is that it slows us down to the rhythms of the elderly narrator and the regularity of life in a small town. In his meditative letter, the minister touches upon the battles between fathers and sons, the meaning of friendship, the wonderful beauty in the natural world, the rituals of baptism and blessing, and the healing he has sought and found in Gilead. The time span covers the bounties of Christian faith and service during 100 years of family history. Here is a clergyman who loves hymns and has preached thousands of sermons. He reflects on his 2250 sermons stored in boxes and his respect for theologian Karl Barth. Ames has learned to respect the mysteries of life and the small pleasures of living by honing the spiritual gifts of wonder, attention, and listening.

With sober-mindedness, Ames tallies up the legacies of his pacifist father, his wild grandfather with one-eye and many visions of God, and the impact of losing his first wife and child in childbirth. He has spent much of his life listening to others, and at one point, states: "That's the strangest thing about this life, about being in the ministry. People change the subject when they see you coming. And then sometimes those very same people come into your study and tell you the most remarkable things."

Whether pondering the delights of baseball, appreciating the beauties of nature, or commenting on the many books he has read, Ames demonstrates how the Christian life can be awash with enchantments if one takes the time to count one's blessings and give all the praise to God, who is wrapped in one mystery after another.

For further exploration, please see the We the People Book Club guide to Gilead, available for download as part of the Practicing Democracy Project.

On the Sabbath
"Sometimes I have loved the peacefulness of an ordinary Sunday. It is like standing in a newly planted garden after a warm rain. You can feel the silent and invisible life. All it needs from you is that you take care not to trample on it.

On the Light
"I was struck by the way the light felt that afternoon. I have paid a good deal of attention to light, but no one could begin to do it justice. There was a feeling of a weight of light — pressing the damp out of the grass and pressing the smell of sour sap out of the boards on the porch floor and burdening even the trees as a little late snow would do. It was the kind of light that rests on your shoulders the way a cat lies on your lap. So familiar."

On Grace
"I'd never have believed I'd see a wife of mine doting on a child of mine. It still amazes me every time I think of it. I'm writing this in part to tell you that if you ever wonder what you've done in your life, and everyone does wonder sooner or later, you have been God's grace to me, a miracle, something more than a miracle to me. You may not remember me very well at all and it may seem to you to be no great thing to have been the good child of an old man in a shabby little town you will no doubt leave behind. If only I had the words to tell you."

On Baptism
"When I was in seminary I used to go sometimes to watch the Baptists down at the river. It was something to see the preacher lifting the one who was being baptized up out of the water and the water pouring off the garments and the hair. It did look like a birth or a resurrection. For us the water just heightens the touch of the pastor's hand on the sweet bones of the head, sort of like making an electrical connection. I've always loved to baptize people, though I have sometimes wished there were more shimmer and splash involved in the way we go about it."

On Emissaries Sent by the Lord
"When you encounter another person, when you have dealings with anyone at all, it is as if a question is being put to you. So you must think, What is the Lord asking of me in this moment, in this situation? If you confront insult or antagonism, your first impulse will be to respond in kind. But if you think, as it were, This is an emissary sent from the Lord, and some benefit is intended for me, first of all the occasion to demonstrate my faithfulness, the chance to show that I do in some small degree participate in the grace that saved me, you are free to act otherwise than as circumstances would seem to dictate. You are free to act by your own lights. You are freed at the same time of the impulse to hate or resent that person. He would probably laugh at the thought that the Lord sent him to you for your benefit (and his), but that is the perfection of the disguise, his own ignorance of it."

If You Like This Book, You'll Also Want to Read . .
• Father Melancholy's Daughter by Gail Godwin
• Mystical Paths by Susan Howatch
• In the Beauty of the Lilies by John Updike
• No Other Life by Brian Moore
• Saint Maybe by Anne Tyler 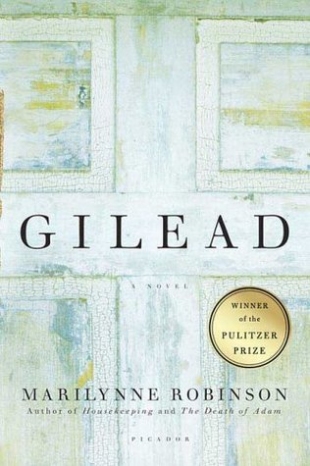