Testimony The Word Made Fresh

By Daniel Berrigan
An incisive overview of the author's ardent faith, prophetic words, and ethical convictions.

Daniel Berrigan has consistently preached and demonstrated the truth of the Gospel of nonviolence in a life that has moved from churches to the campus, from city streets and demonstrations to retreat centers, from media appearances to courtrooms and jails. In the foreword, John Dear says of him: "His life fits into the Acts of the Apostles, one of his favorites, with its rhythm of arrests, jails, courtroom scenes and eloquent testimony." Berrigan has written over 50 books and continues to teach, lecture, lead retreats, write poetry, and offer his witness to the power of peace. The talks, essays, poems, and reflections in this top-drawer paperback present an incisive overview of this Jesuit's ardent faith, prophetic utterances, and ethical convictions.

The various pieces are organized in chapters titled: They Shall Beat Their Swords into Plowshares; The Way, the Truth, and the Life; Prophets and Peacemakers; Sermons and Homilies; and Christians in a Warmaking State. Berrigan has seen and experienced many twists and turns in his long quest for justice and peace. In this volume, there are thoughtful and passionate tributes to Dorothy Day, Martin Luther King, Jr., Thomas Merton, Archbishop Romero, the four churchmen and the Jesuit Martyrs of El Salvador, Sister Corita Kent, Rabbi Abraham Heschel, William Stringfellow, and his brother, Philip Berrigan. Here are Christians who were not afraid to stand up and be counted on the side of peace and nonviolence. Here were courageous individuals unwilling to turn away from the poor and the wretched of the earth. They resisted war and the constant beat of hatred and violence.

Berrigan is an idealist but certainly not a naïve one. He writes:

"I regard war as a brute fact of our lifetime, and more, as a metaphor, an emblem. War reveals the contempt for life implied in current forms of the wasting of life — abortion, capital murder, medical experimentation, warehousing of the aged, denial of housing and education and food and healthcare and a clean environment.

"In wartime, crimes against the living are not only to be taken for granted, but are considered inevitable, even praiseworthy.

"War also is a kind of periodic explosion in nature, of the spiritual ills that fester beneath the skin and skull of the culture, ills like racism, sexism, greed and duplicity in high and low places."

Over the years, Berrigan has been saddened by Christians who have aided and abetted the engines of war and turned away from Jesus' call to love our enemies and to put down the sword. Some have tried to make a case for just wars, while others marched in lockstep with those who have touted military solutions to age-old problems. Some of the most touching selections are in reference to his brother Philip who died in 2002 after having spent nearly eleven years in prison for nonviolent resistance against war. Peacemaking is a long and arduous journey that has brought the author face-to-face with the worst and the best that is within us.

Berrigan still nurtures hope. He is an inveterate believer in the resurrection. These pages shine with his persistent efforts to speak out against the darkness that comes with war, the international arms trade, and the arrogant imperialism which inspires more violence against people around the world. The work for peace is more urgent than ever, and there is no greater soul to turn to for guidance and inspiration than Daniel Berrigan, a Christian who always speaks words of truth. And those words are forever fresh. 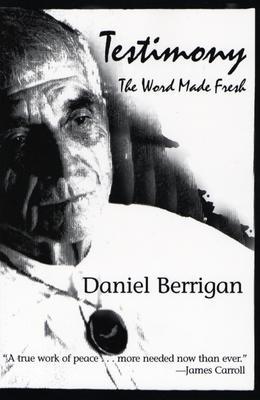