By Rushworth M. Kidder
A practical resource that delineates the meaning, the clout, and the steps involved in this virtue.

Rushworth Kidder is a former columnist and correspondent for the Christian Science Monitor who in 1990 founded the Institute for Global Ethics. This volume is the third in a trilogy that includes Shared Values for a Troubled World and How Good People Make Tough Decisions. Its theme is the courage needed to live a moral and ethical life. Kidder identifies exemplars of this virtue — Mahatma Gandhi, Nelson Mandela, Lech Valesa, Vaclav Havel, and Aung San Suu Kyi. He also points to the nonprofit Giraffe Project which has handed out more than 946 commendations to individuals with "vision and courage" who have been "willing to stick their necks out" by standing up for what they believe in.

In delineating the meaning and clout of moral courage, Kidder has gathered real-life stories from historical accounts, public media sources, interviews, conversations, letters and emails from the United States and around the world. Here are examples of whistleblowers, community leaders, and ordinary people from all walks of life who were compelled to express courage based on a commitment to moral principles, an awareness of the danger involved in supporting those principles, and a willing embrace of that danger. Whether working at a corporation, NASA, or another institution, they had to consider seven checkpoints along the path: (1) assess the situation, (2) scan for values, (3) stand for conscience, (4) contemplate the dangers, (5) endure the hardship, (6) avoid the pitfalls, and (7) develop moral courage.

Moral courage, according to Kidder, comes in a variety of flavors and includes some of the core moral values that are cherished around the world — honesty, responsibility, respect, fairness, and compassion. He notes: "Moral courage is a quality of mind as well as spirit because it involves both the processes of intellectual discourse and the feelings of rightness and wrongness inherent in each individual. It enables us to face up to problems — not necessarily to resolve them and certainly not to promise that we will master them, but to address them squarely, frontally and with determination. It requires action that is both firmly persistent and confidently assured that its tools — the moral, mental, and emotional elements of argumentation and persuasion — are sound enough to weather serious resistance. Finally, it requires us to act without flinching or retreating in the face of persuasions, from the subtle to the violent, that make us want to turn tail and run."

Acting with moral courage is never easy. Kidder does a fine job assessing the crucial inhibitors which include timidity, tepid ethics, over-reflection, bystander apathy, groupthink, and cultural differences. Although there seem to be too many stories in this book, the subject is so important that we can forgive the author for his excessive enthusiasm. Kidder has made himself an expert on ethics in the post-modern world, and this rigorous work deserves a large and receptive audience.

Now more than ever we need principled individuals who are willing to stand up for what they believe in and to walk the talk of ethics. This practical resource shows them how and why to do so. 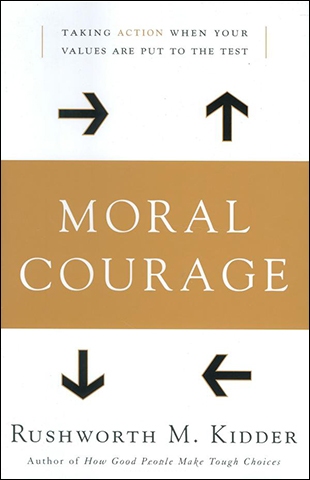