By Dean Brackley
A salute to the healing powers of humility and generosity in a world of many separations.

Dean Brackley is a professor of theology at the University of Central America (UCA) at San Salvador. He was sent there as one replacement for the six Jesuits murdered in 1989 by the Salvadoran military. With his longstanding experience in community organizing and social action/reflection in the South Bronx and Manhattan's Lower East Side, he continues to be actively involved in parish work and pastoral care.

Dean Brackley is convinced that the practical wisdom of Ignatius Loyola, written four centuries ago, offers guidance for our troubled times, which are characterized by a global social crisis. With sections on getting free, something worth living for, discerning and deciding, passion and compassion, resurrection and prayer; he uses the Spiritual Exercises of Ignatius as a means of introducing us to "a life of deeper faith, hope and love."

Widespread poverty and the growing gap between the rich and the poor creates a world that excludes billions of people from the banquet-table. Although the media rarely reports on the lives and struggles of the down-and-out, Christians are challenged by the call to community to empathize with them and assume their cause. Ignatius emphasized the virtues of humility and magnanimity as antidotes to pride and selfishness. Brackley suggests that to live in the spirit of Christ requires downward mobility rather than the upward mobility so esteemed in our society: "The solution to our global crisis is not that the poor become rich, which is neither feasible nor desirable, but that the rich join with the poor. The only solution is communities of equals, resisting pyramids of inequality. While some economic differences are legitimate, discrimination and misery are not. In communities of equals, personal talents, instead of advancing some at others' expense, are stewarded for the benefit of all."

The Call to Discernment in Troubled Times brings the wisdom of Ignatius of Loyola to bear on some of the injustices that are rampant in the twenty-first century. It salutes the healing powers of humility and generosity in a world of many separations. 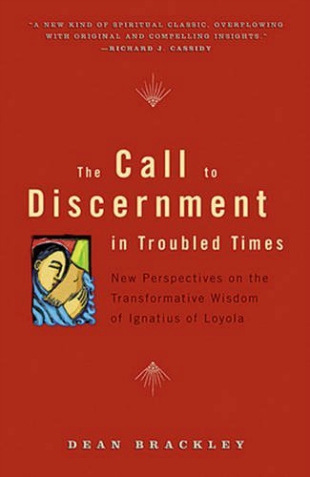