Keeping Faith A Skeptic's Journey Among Christian and Buddhist Monks

By Fenton Johnson
A fine spiritual memoir about the wisdom and practices learned at monasteries.

Fenton Johnson is the award-winning author of two novels and a memoir. This volume was the recipient of the Lambda Literary Award for Spirituality and the Kentucky Literary Award for Nonfiction. Johnson was raised a Catholic not far from Gethsemane Abbey. In the early 1990s, he attended a meeting there between Catholic and Buddhist monks. This event spurred him on a spiritual quest "through the briars and thistles of faith and (its traveling companion) desire, with no compass save for an inquiring but ignorant heart." He split his time between the monks at Gethsemane and the Buddhist Tassajara Zen Mountain retreat center in California and its sister center at Green Gulch.

From the Buddhists, Fenton learns the meaning of spiritual practice in meditation. He is impressed with the reflection and action at Gethsemane based on the Rule. Monks at both monasteries help him find ways to tame his anger. He notes: "The monastery is thus the remnant, carried forward even in contemporary times, of a community of people committed to the search for wisdom. Perhaps that, above and apart from the particulars of the vows, is its defining characteristic and the key to both its importance and its persistence across diverse and often hostile times and cultures." His idea of faith is expanded and deepened to move beyond the dogmatism of zealots and the cynicism of modern day secularists. He sees the importance of imagination in the realm of faith. 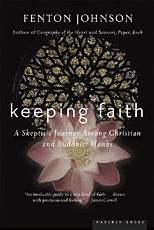