Encyclopedia of an Ordinary Life

By Amy Krouse Rosenthal
An immensely playful and creative memoir brimming over with good stuff.

The ordinary days of our lives, is it possible to catch all the playfulness, humor, waywardness, and wonder that resides in each and every one of them? Amy Krouse Rosenthal is a 39-year-old author from Chicago who has found a creative way of assembling her memoir. This clever author of adult and children's books, contributor to magazines and NPR, and "mother of some kids" has processed the humdrum days of her life in an encyclopedia format with short entries organized from A to Z, some of which are cross-indexed.

Rosenthal begins with a punchy section titled "Orientation Almanac" where she presents some plain facts about American life at the start of the twenty-first century. There are lists of people to whom we attribute power, such as movie stars, rock stars, sports stars, rich people, and major political figures. Among the common signs which litter the landscape of our minds: "Not responsible for lost or stolen property" and "Employees must wash hands before returning to work." Things to memorize include phone number and home address, cell phone number, pager number, pin number, social security number, and E-mail password.

Rosenthal, like many of us, tries not to get too depressed by her own foibles and the follies of our times. She says of answering machines: "In most cases, it is more satisfying to get a friend's answering machine and leave a cheery, tangible trace of your sincere commitment to the friendship that it is to engage in actual conversation." She wonders: "It is weird and unsettling that a person who is hired to handle your money, make wise decisions about it, and, ostensibly, keep you from losing it is called a broker." The author peppers us with playful vignettes including one about a neighbor's son who sees leaves twirling around outside and says to his father, "Look, Dad — the leaves are playing with each other." In another, a family hung lollypops on a tree in the backyard and invited some other kids to share in the celebration of their tree in full bloom.

Rosenthal calls these "sacred minutes," and she is right to do so for they elicit in us wonder and delight. Be sure to savor the salty pieces on rainy days, comparisons between the church and the mall as two modern places of worship, and on sharing details of your trip with others. And remember that no day is quite like any other once you are attentive to all its nuances and marvelous details. 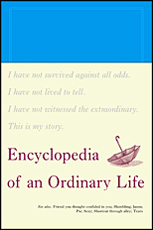