The Lure of Saints A Protestant Experience of Catholic Tradition

By Jon M. Sweeney
A lively mix of material on those exemplary persons who have fertilized everything with God.

Jon M. Sweeney is the co-founder and former editor-in-chief of Skylight Paths Publishing, which over the past seven years has blazed a trail in the field of multifaith practices through a series of extraordinary books. He is the author of Praying with Our Hands: 21 Practices of Embodied Prayer from the World's Spiritual Traditions and two volumes on his favorite saint, The St. Francis Prayer Book and The Road to Assisi: The Essential Biography of St. Francis. In this new eye-opening work, Sweeney, an Episcopalian, explains his personal devotion to saints who have been exemplary figures and models of sanctity. Although he admits to feeling more at home spiritually in the sanctuary of a great church, in the halls of a cloister, or on a simple pilgrimage, he has written this book for those want to discover God in secular places as well.

With clarity and succinctness, Sweeney outlines the differences between the Protestant and Catholic imaginations (the first stresses the gulf between human beings and God whereas the other revels in the sacramental presence of the sacred in everyday life); discusses the process whereby saints have been selected and honored through the ages; ponders the wide expansion of the Protestant idea so that there are now more than 30,000 denominations around the world; and examines some of the varied manifestations attributed to saints, including stigmatas, apparitions, miracles, and the gift of tears. Sweeney presents a lively mix of material on saints from all ages who have "fertilized everything with God," and reflects on the work of three late twentieth-century saints-in-the-making (Mother Maria Skobtsova, Joseph Cardinal Bernardin, and Cardinal Franz Konig) and the wonders of three saints who performed "miracles of justice" (Oscar Romero, Sir Thomas More, and Dorothy Day).

Having edited so many pioneering works on spiritual practice as a unifying force among all religions, Sweeney makes his most original contribution here in his emphasis on ancient and modern spiritual practices relating to saints. He includes his own devotional exercises as well as rituals by Abbot M. Basil Pennington, Wayne Teasdale, Mitch Finley, the Rev. Mary E. Haddad, and others. Best of all, these profiles of holy men and women might inspire you to take more seriously your own calling and aspiration to live as a saint today. 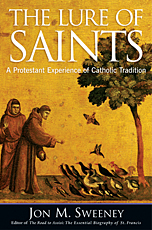