By Joseph Marshall III
Offers many insights into the essence of Native American spirituality.

Joseph Marshall III was raised on the Rosebud Sioux Indian Reservation, and his first language is Lakota. In his career, he has been a teacher at the high school and college levels, an educational and health programs administrator for the Rosebud Sioux Tribe, a master craftsman of the Lakota bow and arrow, a historian, and a writer. The recipient of the Wyoming Humanities Award, he is the author of several books including The Lakota Way and The Journey of Crazy Horse. On this superb six CD audio course, which lasts six-and-one-half hours, Marshall presents a definitive account of the life and the legacy of Crazy Horse (1840-1877). "He was much more than the legend. He was a quiet, humble man born into a time of turmoil and revolution."

With precision and a great respect for oral tradition and the power of stories to move our hearts, minds, and souls; Marshall briefly outlines the history of the Lakota Nation with material on family and kinship, first contact with Euro-Americans, the Indian Wars, the Ghost Dance, horses, and the preservation of Lakota language and culture. Then, in two parts, he unspools the life of Crazy Horse: his boyhood name of Light Hair, his vision quest and the future it shaped for him, the Sand Creek Massacre, the Wagon Box fight, the Fort Laramie Treaty, the destruction of the buffalo, the influential figures in his life, the love of his life who was given up twice, the victory at the Rosebud, the two engagements of the Little Big Horn, the decision to withdraw, the move to Camp Robinson, and his death at 37 years of age. It breaks one's heart to hear about the injustice, trickery, and violence heaped upon the Lakota.

Marshall hits high stride in his eloquent portrait of his childhood hero when he takes the measure of Crazy Horse as a "Thunder Dreamer" whose calling was "to walk the path of giving as opposed to gaining." He ponders this noble man's humility, compassion, and selflessness. Whereas other warriors wore eagle feathers to show their prowess in battle, Crazy Horse never did, even after he was honored with 100 eagle feathers. Throughout his life, this exemplary figure was seen as a "shirt wearer," one who put the welfare of the tribe above his own interests. Marshall also salutes the leadership principles of Crazy Horse: 1. Know yourself; 2. Know your friends; 3. Know your enemies; and 4. Always go first. This enlightening audio retreat offers many insights into the essence of Native American spirituality. 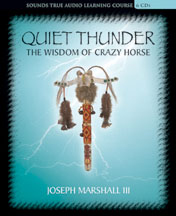