By Beatrice Bruteau
Presents the two teaching events of Holy Thursday -- Footwashing and Holy Communion -- as entry gates into a new way of living and loving in a world of domination, power, and separation.

According to Beatrice Bruteau, a spiritual writer with deep interests in mysticism, philosophy, and religion, the chief paradigm in today's world is one of domination, exploitation, accumulation, and force. From the time when we are very young, we are trained to see our peers and adults as potential threats. We are separate from them, and they are separate from us. Looking around, we see that the world is divided into winners and losers, top-dogs and runts. Or as spiritual teacher Eknath Easwaran once put it: "Most of us suffer from the mistaken belief that it is in grabbing that we receive, it is venting anger that we improve our relationships, and it is having our own way that we find fulfillment."

In contrast to this paradigm of Dominance is the Communion Paradigm initiated by Jesus on Holy Thursday. Through the acts of Footwashing and Holy Communion, he set forth a second creation that was foreshadowed in the revelation at Sinai and elucidated in the words and deeds of the Hebrew Prophets. Throughout his ministry, Jesus broke down the boundaries between the righteous and the unrighteous, the rich and the poor, the diseased and the healthy, the social authorities and the people. In Bruteau's eyes, Jesus offers to all his unconditional positive regard when he says to his disciples that he no longer calls them servants but friends:

"Jesus gathers people into communities in which the mutual recognition as children of God is the foundation for social interaction, and the social feeling is mutual affirmation. In the community, each person does the same thing that Jesus originally did: loving another person on the level beyond any description, beaming full attention (with all one's heart, soul, mind, strength) of positive regard. This can awaken the sense of selfhood in one who has not yet known it, and in this way the community expands."

Jesus and his friends support each other in the work of Tikkun olam — healing or mending the world. To do this difficult and important mission, Christians are challenged to move to a place beyond competition or comparisons with others, a place where people belong to each other, a place of caring and sharing, of unstinting generosity. It is, most importantly, a place where we acknowledge and honor the divine in others:

"Jesus had a fundamental vision-faith that all people are 'children of God.' This is the theological perspective of his 'program,' on which everything else rests. I am supposing that he took this seriously, more or less literally, as the Kabbalah does in teaching that each person has an uncreated soul that is actually a continuation of the Divine Life itself. When he met a person, therefore, he really believed that God was somehow present in that person, so he looked for that presence through all the overlying contradictions to it, until he found it. Then he addressed himself to that point in the person. As the Hindus also say, the divine in him saluted the divine in the other. When anyone does that, it tends to awaken the divine in the other, who is thus invited to speak from that place in return."

The Holy Thursday Revolution challenges us to fulfill our calling as God's loyal sons and daughters to be co-creators of a new world based on mutuality, love and transformation. 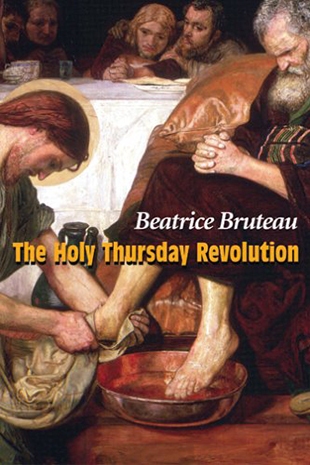