How to Expand Love Widening the Circle of Loving Relationships

By His Holiness The Dalai Lama
Helpful and down-to-earth practices developed over the centuries in Tibet for cultivating love and compassion.

Buddha said: "If one teaching is grasped and known, all of my teachings will be in the palm of your hand. What is the one teaching? Altruism." Most of us have habitual ways of acting that can hinder us from putting the welfare of others ahead of our self-interest. In this illuminating work, the Dalai Lama shares some helpful practices developed over the centuries in Tibet for cultivating love and compassion. He explores seven steps for widening the circle of loving relationships: recognizing friends, appreciating kindness, returning kindness, learning to love, the power of compassion, total commitment, and seeking altruistic enlightenment.

The Dalai Lama has often described his religion as a simple one: "No need for temples. No need for complicated philosophy. Your own mind, your own heart, is the temple; and your philosophy is kindness." The first challenge on this path is to restructure our relationships in a more even-minded way,. rather than categorizing people as either a friend, an enemy, or a neutral person. For the first we have positive feelings; for the second, negative ones; and for the third, feelings of indifference. Yet given the changes in our lives and the impermanence of all things, there is no certainty that "a friend, an enemy, or a neutral person will at all times either help, harm or do neither."

Once in a while, an enemy becomes a friend. The Dalai Lama has demonstrated this mind-set by stating that even though the Chinese have persecuted his people, he sees them in his heart as being no different. He goes a step beyond that by thinking of them as teachers who give him an opportunity to practice patience, love, and compassion. The enemy becomes the greatest teacher of altruism!

There are many fine spiritual insights in this sturdy book of Tibetan practices translated and edited by Jeffrey Hopkins, who served for a decade as the interpreter for the Dalai Lama. Other topics discussed are suffering, troublesome emotions, and a love freed of bias and attachment as the source of human rights. 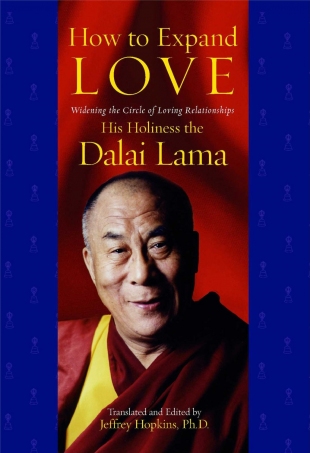