The Marvels and Mysteries of The Da Vinci Code

Book reviews and excerpts that discuss the themes of Dan Brown's novel.

Dan Brown's novel The Da Vinci Code has sold 60 million copies and inspired tours to the museum, chateau, churches, and monuments central to its plot. Websites have sprung up to explore its intricacies, and television channels have run nonfiction films exploring its themes. Now there's a movie, and with Ron Howard as the director and Tom Hanks as the star, it's expected to be the hit of the season. Many conservative Christians are already launching a full-fledged attack on the movie without having seen it. (They did the same kind of thing when Martin Scorsese's The Last Temptation of Christ was released in 1988.)

Why all this attention and all this fuss? The quasi-mystical novel and movie offer us opportunities to probe many fascinating subjects. To prepare for the film experience, with hopes that this will broaden it for you, we've dipped into our book reviews and book excerpts to see how other writers have presented its ideas and themes: the presence and the suppression of the Sacred Feminine, Jesus and Gnosticism, and Mary Magdalene in the Bible and in contemporary consciousness.

The Da Vinci Code touches on other themes, as we point out in our review, but one reason it has been so popular, we believe, is that these are fresh areas of exploration for many people. There are marvels and mysteries to be found here. Enjoy the quest.

I. Sophia or the Divine Feminine

• Although many people still think of the Deity as being masculine, there is a rich and varied tradition of the Divine Feminine. In the primal religions, she is recognized as present everywhere in the natural world. She is honored in Judaism as Shekinah, as Kali in Hinduism, as Kuan Yin in Buddhism, and as Primordial Mother in Taoism. Some Muslims and Christians also celebrate traditional feminine virtues as being aspects of God. See examples from these traditions in The Divine Feminine: Exploring the Feminine Face of God Around the World by Andrew Harvey and Anne Baring.

• The Goddess was reverenced in many ancient societies, but she was eventually eclipsed by male deities. Then Sophia reemerged in Gnostic, pagan, Judeo-Christian, and Islamic traditions as the Bride of God, Black Goddess, Apocalyptic Virgin, and Mother of God. The authoritian religious powers-that-be, however, cracked down on this multidimensional access to Sophia. Today, she is once again bringing new fire to all souls as illuminated in this excerpt from Sophia Goddess of Wisdom, Bride of God by Caitlin Matthews.

• In The Divine Feminine in Biblical Wisdom Literature, Rabbi Rami Shapiro explores the teachings of Mother Wisdom in the Psalms, Proverbs, Job, the Song of Songs, Ecclesiastes and the Greek texts, the Wisdom of Solomon and the Wisdom of Jesus Ben Sirach. For centuries, male chauvinism has tried to silence her anti-establishment and nonhierarchical emphasis but these forces have not prevailed.

• Lady Wisdom continues to teach, guide, and protect humanity with her nurturing love. Here are two excellent resources on this process: Sophia-Maria: The Holistic Vision of Creation by Thomas Schipflinger and The Sophia Teachings: The Emergence of the Divine Feminine in Our Time by Robert Powell; the latter is an audio retreat with prayers and devotional exercises which can be used to honor Holy Sophia.

• Feminist theologies over the past 25 years have presented a series of revised images of divinity. After the ecumenical 1993 Re-Imagining Conference, the women who articulated these ideas were widely vilified by a conservative Christians who branded them as heretics and neopagans. That reaction is now being paralleled by alarms over The Da Vinci Code. For more about all this, see Re-Imagining The Divine: Confronting the Backlash against Feminist Theology by Laurel C. Schneider.

• Margaret Starbird in The Feminine Face of Christianity presents the vibrant and impressive contributions of holy women to this religious tradition that has justifiably been severely criticized for its patriarchal excesses.

• The hurtles against women and their spirituality are still legion. One reason for this is the lingering toxic effect of the biblical story about Eve in the Garden of Eden. Read this disturbing excerpt from The Sins of Scripture: Beyond the Texts of Hate to the God of Love by John Shelby Spong to get an idea of the enormity of sentiment against women.

II. Gnosticism and the Battles Surrounding It

• Elaine Pagels won a National Book Award for The Gnostic Gospels. Since then much has happened surrounding the apocryphal texts on the life and work of Jesus Christ. In Beyond Belief: The Secret Gospel of Thomas, she points out that from the second through the fourth centuries, various Christian leaders declared that true believers must hold to certain beliefs in order to be saved. The battle raged between Irenaeus, the principal architect of what is called the four gospel canon, and those who found meaning and validity in the secret Gospel of Thomas (rediscovered in Egypt in 1945). The same battle lines are being drawn today. On the one side are orthodox and usually conservative Christians; on the other side are many progressive Christians along with millions of spiritual seekers who are unaffiliated with any churches. The challenge, according to the author, is to cherish the diversity within Christianity and to find value and meaning from all the early Christian texts.

• Jesus is presented as a mystical sage in The Gospel of Thomas edited by Stevan Davis. Here the kingdom of God is described as being present in the midst of life. There are no end-of-the-world sayings.

• Ron Miller in The Gospel of Thomas: A Guidebook for Spiritual Practice argues that the message of this revolutionary text is that we must take responsibility for our spiritual growth and not merely passively wait for God's grace to set in motion our good works of peace, hospitality, love, compassion and openness. He insists that what this gospel is calling for is spiritual practice.

• In this excerpt from Son of Man: The Mystical Path to Christ, Andrew Harvey spells out the value of Gnostic Christianity — "an overwhelmingly varied, brilliant, and radical mystic exploration of the nature of God and the Christ-consciousness, an exploration whose openness to the Sacred Feminine in particular contemporary Christian seekers urgently need to understand and learn from."

• The earliest Gnostics were religious thinkers who believed in the validity of mystical knowledge and personal religious experience. In Forbidden Faith: The Gnostic Legacy from the Gospels to The Da Vinci Code, Richard Smoley traces the labyrinthine development of this wisdom tradition. If you are interested in the appeal of popular manifestations of Gnosticism, this is the right book for you. Today many spiritual seekers are exploring self-knowledge and see themselves as rebels against runaway Christian fundamentalism and the reduced status of women in all the world's religions. Smoley is convinced that this legacy will endure as long as individuals believe that direct spiritual awakening can happen to anyone, anywhere, at any time. Read an excerpt on the link between the resurgence of interest in the Divine Feminine and The Da Vinci Code.

One of the thematic strands in the novel The Da Vinci Code is the idea that Jesus and Mary Magdalene were married and had children, descendants of whom exist today. For orthodox and traditional believers, this presents a difficult leap of faith given the strong emphasis against sexuality of all types in the history of Christianity. The discovery of the apocryphal Gospel of Mary comes as another shock to those who have been told that the only point of Mary Magdalene's presence in the Bible is to be a teaching moment against the immorality of prostitution. To now discover that she was an apostle to the apostles is amazing to many and heretical to others. We think many doors can be opened, letting fresh air into the musty halls of Christendom, by our taking another look at Mary Magdalene.

• According to Karen L. King, Mary Magdalene as a prostitute is a piece of theological fiction used over the centuries as "a model of a latter-day Eve turned from her sinful ways." In The Gospel of Mary of Magdala: Jesus and the First Woman Apostle, King spells out the multiple meanings of early Christian debates about the authority of apostolic tradition, prophetic experience, and women's leadership. In this excerpt, she points out how women as well as men could assume leading roles in the Christian community on the basis of their spiritual development. This, of course, dashes all arguments put forward by men about why women should not be clergy.

• In The Gospel of Mary Magdalene, Jean-Yves LeLoup discusses Miriam of Magdala as an intimate friend of Jesus and the initiate who transmits his most subtle teachings. Anyone reading this text will savor the hints of the Divine Feminine, an endorsement of the visions and value of creative imagination, and a joyful celebration of the mystery of grace.

• In The Sacred Embrace of Jesus and Mary: The Sacred Mystery at the Heart of the Christian Tradition, Jean-Yves LeLoup makes the point that Jesus did not seek to redeem humanity from the life of the flesh but to salute it as a spiritual path of growth and development. He discusses Jesus' sexuality and comments on the idea of the marriage between him and Mary Magdalene as depicted in the novel The Da Vinci Code. Leloup comments in this excerpt on Jesus' sexuality, the incarnation, and love.

• Thomas Moore has another take on the controversial subject of the sexuality of Jesus. Here is an excerpt from The Soul of Sex.

• Would you like to learn more about Mary Magdalene? Lesa Bellevie is the founder and webmaster of a website devoted to Mary Magdalene. She is also the author of The Complete Idiot's Guide to Mary Magdalene. This is an encyclopedic compilation of material about this Biblical figure and extraordinary woman who is more alive in the consciousness of people than ever before thanks to The Da Vinci Code. Here is a quiz testing your knowledge about Mary Magdalene based on information from Bellevie's book.

• Susan Haskins presents an impressive overview in Mary Magdalen: Myth and Metaphor. This book is filled with many artistic renditions of Mary over the centuries. In addition, we were quite moved by an quotation from a sermon given on Mary Magdalene's feast day by a John S. Damm at St. Peter's Lutheran Church in New York City.

• We feel very fortunate to have stumbled across The Woman's Book of Guardians: Divine Guides, Muses, Totems, and Protectors for Everyday Life by Peg Streep. She has written a very impressive and meaningful tribute to Mary Magdalene as a guardian of spirituality.

IV. Other Bold Movies Exploring the Themes in The Da Vinci Code

• For a surprising movie that ends with some surprising deeds by God the Mother, don't miss Dogma.

• For the first dramatization of the marriage of Jesus and Mary of Magdalene, watch The Last Temptation of Christ, based on a novel by Nikos Kazantzakis.

• For two very different Mary Magdalene characters relating to Jesus characters, check out Constance and Daniel in Jesus of Montreal and Trinity and Neo in The Matrix.

• For a chilling and scary overview of the nightmares created for women by the Catholic Church, see The Magdalene Sisters about profit-making laundries throughout Ireland operated by an order that punished upwards to 30,000 girls for their so-called sexual improprieties (having a child out of wedlock or being a "temptress").

• In The Passion of Mary Magdalen: A Novel (The Maeve Chronicles), Elizabeth Cunningham presents Mary as the embodiment of the Divine Feminine. She even shape-shifts into the dove who is present at some of the most important moments in the life of Jesus of Nazareth. 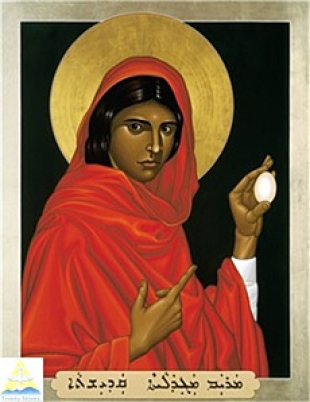