An Interview with Phil Cousineau

An interview with the host the Global Spirit series on his own spiritual journey, his mentors Joseph Campbell and Huston Smith, and the unique approach of the new series.

Frederic Brussat: How did you happen to get involved with the Global Spirit series as the host?

Phil Cousineau: The director and producer Stephen Olsson contacted me a couple of years ago and said he had been working for LINK TV for some time, directing and producing some of their political programs. He said he'd come up with an idea, along with his associate, Lorraine Hess, to do for culture and spirituality what LINK had been doing for politics — offer up a cross-cultural, global perspective; hence, Global Spirit. When he set out to look for a host he asked around the Bay Area and while speaking with John Antonelli, noted for his documentary on Jack Kerouac, John recommended me. Stephen and I met at one of my local North Beach hangouts, Caffe Puccini, and immediately felt like kindred spirits.

Fred: Talk a little about your own spiritual journey and where it has taken you.

Phil: I was raised French-Catholic and went to the University of Detroit, a Jesuit college, to study journalism. After graduation I spent three years on a sojourn around the world, immersing myself in culture everywhere I went. Shortly after returning to the States, in 1976, I began studying with Kenneth Cohen, now a well known Qigong master, who recommended I study the work of Joseph Campbell because "he's weaving together everything you're interested in." He was right: I was all over the place, studying world mythology, comparative religion, literature, poetry, philosophy, and filmmaking. I had no idea it could be all tied together until I started actually working with Campbell, ultimately cowriting the film about him, The Hero's Journey.

In the early 1990s I had a second great stroke of luck, in terms of mentors, which was meeting up with and collaborating with Huston Smith, the beloved historian of religion. Besides becoming a great friend and godfather to my son Jack, Huston has given me the courage of my convictions that compassion is at the heart of all great religious traditions.

Fred: I know you have spent a lot of time and energy Campbell and Smith. What makes them great spiritual teachers for you? What did you learn from them about being a host?

Phil: What made Campbell and Smith great spiritual teachers for me was that they were both convinced and convincing that there is a great spirit at the heart of all life; that it allows us the transcendence and transport, as Huston says, "to another world," that is part and parcel of the religious message throughout history.

To recognize and pay tribute to this "global spirit" in my guests each week is my greatest pleasure and challenge. I feel like I've been seeking this in my own travels around the world for almost 40 years and now I am able to bring these kinds of conversations to virtually millions of people. I feel like I'm in the position of that wise man who said he'd walk a hundred miles in a snowstorm for one good conversation; all the planning and teamwork involved in creating a show like this is comparable to that kind of effort — all for one good, soulful conversation on topics that matter deeply to me and I believe ultimately to the culture.

Fred: What meanings does the term "global spirit" encompass for you?

Phil: A few years ago I co-led a seminar at UCLA with Huston Smith and a question was asked about the distinction between soul and spirit. Huston handled it beautifully. He simply said, "There are a couple of hundred souls in this room . . . but one spirit." In that sense, then, there is one spirit in the world — the compacted and compressed spiritual energy of billions of people, sometimes sensed as the "zeitgeist," the spirit of the times, sometimes as the spirit of a particular culture or people. And then occasionally we experience a glimpse of the "global spirit" — in moments of tragedy like the events of 9/11, or Gandhi's assassination, or moments of ecstasy, like the Olympics or the moon landings, or Obama's election. At those rarified moments we experience a moment of at-one-ness, a moment of feeling as one with the rest of the human race. I believe that's the "global spirit" — and we are attempting to capture a few of those fugitive but transcendent moments in our series.

Fred: How would you describe the state of the world right now in the month that this series has its premiere? What major issues of the day do the first group of shows address?

Phil: In 1899 H. G. Wells wrote that "History is a race between education and catastrophe." How savvy, how prescient those words have proved to be, perhaps more now than ever. We have innumerable wars raging around the world, the world economy is in turmoil, but the recent elections have lifted the "global spirit" higher than it's been in recent memory. However, we are still a culture in which only 14% of the population owns a passport, and most Americans only get a few minutes, at best, of news about the rest of the globe — so how are we to understand or be understood, if we don't travel, if we don't read, if we don't view anything except our own navel? For these reasons, I think the timing for our show could not be better, more timely, or more propitious. I believe Americans are more open and hungrier than ever to learn about the rest of the human race.

Fred: A trend in the world right now is the rediscovery of the importance of spiritual practice and its role in all religions and everyday life. How is this dealt with in the series?

Phil: This is one of the most interesting trends. Church attendance is down all across Europe — somewhere around 5% of the population regularly attends a religious service. A recent survey in the States surprisingly revealed that fewer and fewer Americans actually identify with any given church. What this suggests is that the vast majority of people at least in the Western world are tired or unhappy with "religion by rote," with theoretical spirituality. As James Joyce said, "You can't teach an old dogma new tricks." On the other hand, what is gaining in popularity here and in Europe is practice itself, which I believe is religion-in-action. In Global Spirit we take a different topic every week, from the quest to the search for ecstacy, to art and spirituality, and so on, and explore spirituality as it is lived today.

Fred: There are many great spiritual teachers from all traditions. How were the ones that appear on Global Spirit chosen?

Phil: For several weeks before we film every show we have conference calls — that is, Stephen Olsson, Lorraine Hess, Joe Kulin, Adrianne Anderson, and myself — and we discuss the theme of the show and then painstakingly go through long lists of possible guests. We try to create a great balance, try to be representative of different traditions, and also try to anticipate how guests might "spark" off each other.

Fred: In the publicity notes for the series, it is defined as an "internal travel series"? Spin out some of your ideas about what that term means to you as a writer who has traveled the globe and written about pilgrimage.

Phil: The German poet Novalis once wrote that the soul is there where the inner and the outer world overlap. That's also an apt way to describe pilgrimage, which is a transformative journey to a sacred place, a way in which one's inner soul overlaps with the soul of the world. Our series attempts to replicate that rather alchemical formula: three or four of us gather together in a studio to take a journey, a pilgrimage into a topic, in which we hope something transformative will transpire.

Fred: Why aren't there more TV series about spirituality and the world's religions? What do you think makes this one special?

Phil: There's an old saying that you should never talk about how laws and sausage are made; spirituality is like that. Until just recently it seemed to make people uncomfortable to hear about other people's religion, other's spirituality; while of course we loved to talk about our own. But with the enormous popularity of Huston Smith, Joseph Campbell, and recently the Dalai Lama and Karen Armstrong, and others, we are now learning how exciting it is to discover the parallels between our traditions — and honor the differences.

Still, our approach is unique. We are offering an unprecedented mix of conversation, live footage, art work, and music to explore cultural, mythological, and spiritual themes — without commercial breaks — for a full hour and for ten consecutive weeks. This has never been offered before. It's like a sauna for the soul.

Fred: What do you hope people will take away from this series?

Phil: I am hoping that people feel the frisson, the thrill, of honest conversation about the kind of topics they would love to explore if they could travel to the homelands from whence our guests hail: Africa, Tibet, Turkey, England, and so on. And then that they feel compelled to go out and galvanize some similar conversations with their friends and families. That's what it's all about — what the ancients used to call "the long conversation," sharing some soul talk so we don't feel so all alone on this great green and blue planet of ours. 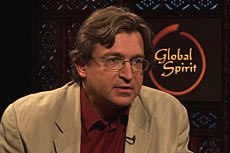