For Super Bowl weekend and any other time, our movie picks for football fans. football.

In every pro, college, or high school football game, there are special moments of magic that stir the soul: a long and desperate pass in the last seconds, a surprising run through the center of the line as the defense parts like the Red Sea, a tackle that saves the day for the whole team, or a field goal kicked by the smallest player on the turf. We are exhilarated by these moments which demonstrate the energy, the skills, the strength, the speed, and the courage of the athletes.

Super Bowl weekend is just ahead. We are ready once again to watch the big event when the two best pro teams vie for the championship. We look forward to seeing which players can lift our spirits as they go with the flow, which team can master all the rigors and setbacks of the game, and who will achieve the dream that has animated their minds, bodies and souls. Along with the huge crowd in the stadium, we will watch and wait united by our identification with the yearning of the players and our empathy with both those who will celebrate a victory and those who will suffer a defeat. That connection in the moment is deeply spiritual.

For those who'd like to prepare for the Super Bowl with a movie or two (and for those in other countries not able to see the game), we have chosen the Ten Best Football Movies. Most of our choices are feature films but there are also a few documentaries. We have purposely selected dramas that put on display the talents of star players at their best, the primal nature of competition and the desire for victory, the valiant efforts of underdogs, and the ways in which the moneychangers in the temple have degraded the beauty of the sport as a game. Even so, as these movies show, play is the most essential activity, and that's a spiritual practice. 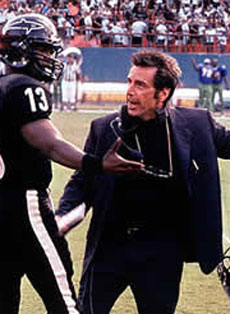 Any Given Sunday offers a rounded and energetic look at pro football as a gladiatorial sport with its pluriverse of media, big money, celebrityhood, advertising, sports medicine, philosophy, and much more. For millions of fans, it is their only contact with the peak experiences of excellence. 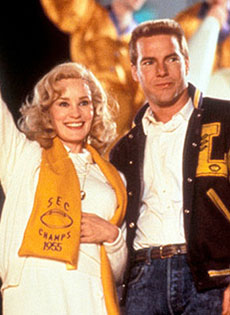 Everybody's All-American covers 23 years in the life of a Louisiana football star who led his team to victory in the Sugar Bowl and married his campus sweetheart. He goes on to play for the Washington Redskins but has a hard time in middle-age without the thrill of the game. 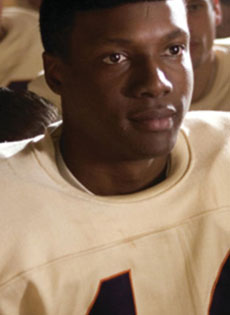 The Express is a sturdy sports flick about the legendary Ernie Davis who was the first African- American to win the Heisman Trophy. It depicts this speedy and talented player's battle against racial hatred both on and off the field. 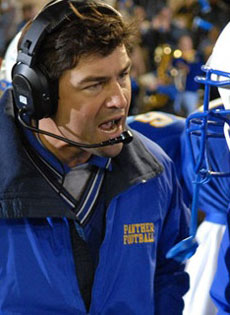 Friday Night Lights is a razzle-dazzle drama about a Texas town where high school football is the only thing that matters to the community. All their hopes and dreams are built on winning the state championship. The story illustrates what this ethic does to the young players on the team. 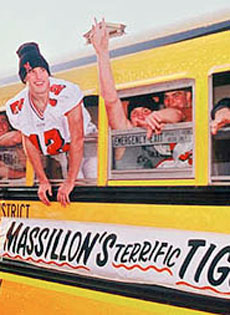 Go Tigers! is a vivid portrait of one high school football season that gives us a snapshot of American values on parade. This fast-paced documentary compels us to ponder the ethical ramifications of the American obsession with winning, the bending of rules for athletes, and the plight of those addicted to what happens on a football field. 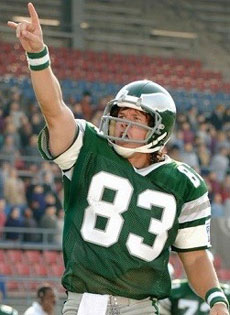 Invincible revolves around the true story of a Philadelphia Eagles football fan who digs deep within and discovers a new life for himself beyond his wildest dreams. Here is an idiosyncratic sports film that hurrahs the discipline and inner strength it takes to be a pro football player. 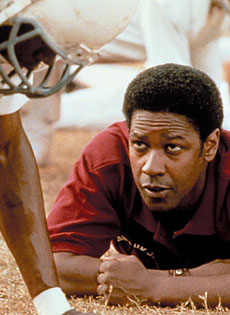 Remember the Titans is based on the true story of a Virginia high school team and the two coaches, one black and one white, who led them during one season to great triumphs both on and off the field. Here the sport of football becomes a workshop for racial harmony and common effort. 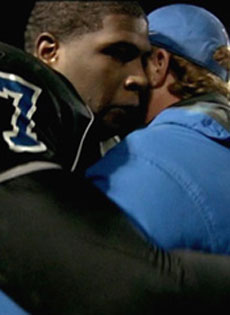 Undefeated is an inspiring documentary about a caring coach of a losing inner-city football team. The emotional core of this riveting documentary is the efforts of a white coach to pull off a minor miracle with his all-black team. 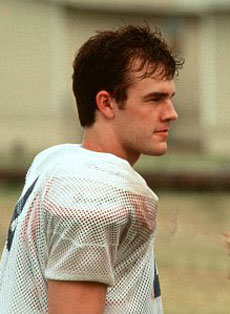 Varsity Blues depicts the ethical struggles of a high school football player to remain true to himself and his dreams when the call of celebrity comes knocking at his door. In addition, his conscience is given a workout by the win-at-all-cost ethic of his coach. 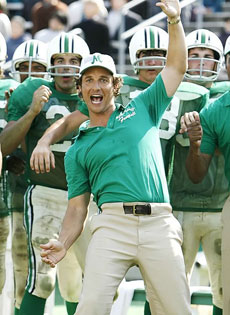 We Are Marshall is an inspiring story that shows how sports can be a healing force in times of loss and grief. After their football team and its coaches are killed in a plane crash, the people of Huntington, West Virginia, decide to put together a new team to honor those they have lost. 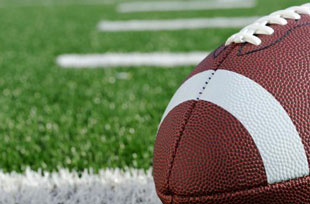