Directed by Jean-Pierre Dardenne, Luc Dardenne
A hard-hitting and involving morality tale about the thief in the heart of a greedy young man.

The Japanese say, 'It is easier to find a thief on the mountain than it is to find a thief in your heart.' The thief in our heart is the desire for instant gratification. Wanting something without the means — or the discipline — to pay for it. We want the reward now, the pleasure now, the new toy now. We steal from our future to satisfy an immediate desire. We usually think of this malady in terms of "prosperous Westerners" who cannot stop acquiring things or living beyond their means. But consumerism has caught on around the world and it's an addiction that affects everyone — even the poor who are barely getting enough food to survive every day. In another hard-hitting minimalist film, the gifted Belgian filmmakers Luc and Jean-Pierre Dardenne have come up with an involving tale of two down-and-out youths. This morality tale hits the mark in its portrait of the thief in the heart that causes so much trouble.

Twenty-year old Bruno (Jeremie Renier) is a street-wise youth whose girlfriend Sonia (Deborah Francois) has just given birth to a baby boy. Returning to the apartment, she finds that he has sublet it to another couple. He is panhandling on the street and working with fourteen-year-old Steve (Jeremie Segard) on several new heists. Sonia finally tracks him down and they frolic together like two teenagers without a care in the world. Bruno has no intention of ever getting a nine-to-five job and Sonia seems to go along with his vagabond lifestyle. They spend money as soon as they get it: for instance, he sees a jacket that is just like his and they buy it for her. Then they spend the night in a shelter for the homeless.

The crisis in their relationship comes when Bruno decides to sell their baby while he is out walking the infant alone. It is a very scary scene as he puts the baby down on his jacket and waits in an abandoned room for a call to get the money that has been given to him in the purchase. When Sonia hears the news, she goes into a state of shock and has to be taken to the hospital. Realizing that he may have gone too far, Bruno retrieves their son with great difficulty and finds himself in deeper trouble than ever when two thugs demand he pay them the money lost on the aborted black market adoption. Sonia recovers and takes the baby with her back to their old apartment. She refuses to see Bruno and he grows more desperate by the moment. In one last act of thievery, he and Steve get in over their heads.

The Child is a gutsy movie that asks us to identify with Bruno, Sonia and their helpless infant who has been brought into a world where nothing is a sure thing, and more people than not set nothing aside for the future. Jeremie Renier (who played the kid coming-of-age in La Promesse) puts in a stellar performance as Bruno. The gift of tears, a very spiritual practice, carries the last scene into our hearts with authenticity. It is a hard lesson to not give in to the thief in our hearts. Not giving in to the thief in our hearts is not an easy path for anyone.

A special DVD feature is an interview with the directors Jean-Pierre and Luc Dardenne. 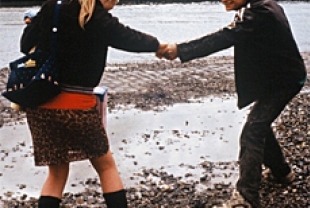