Directed by George Clooney
A stirring tribute to television journalist Edward R. Murrow's courage and conviction in a dark period of American history.

In a speech given in 1958 at the Radio-Television News Directors Association, Edward R. Murrow said this about the place of journalism on TV:

"To those who say people won't look, they wouldn't be interested, they're too complacent, indifferent and insulated, I can only reply: there is, in one reporter's opinion, considerable evidence against that contention. But even if they are right, what have they got to lose?
"Because if they are right, and this instrument is good for nothing but to entertain, amuse, and insulate, then the tube is flickering now and will soon see that the whole struggle is lost.

"This instrument can teach, it can illuminate; yes, and it can even inspire. But it can do that only to the extent that humans are determined to use it to those ends. Otherwise, it is merely wires and lights in a box."

This earnest and thought-provoking quotation ends George Clooney's film Good Night, and Good Luck, a stirring tribute to the idealism, courage, and integrity of television journalist Edward R. Murrow, who from 1953 to 1954 took on Senator Joseph McCarthy and the House Un-American Activities Committee and their communist witch-hunt. Clooney wrote the screenplay with the film's producer Grant Heslov and it is a corker, filled with wry dialogue and insights into the medium of television journalism.

In the midst of Senator McCarthy's fear mongering and demands for employee oaths, Murrow decides to bring to the public's attention the case of Milo Radulovich. A meteorologist for the Army Air Corps, Radulovich had been discharged without a trial because he was deemed a security risk. Even worse, all the charges against him were kept sealed. When CBS bigwig Sig Mickelson (Jeff Daniels) hears about the show, he gets very nervous about its potential impact on the ratings for See It Now. But Murrow and Friendly volunteer to pay for any advertising revenue lost from the show's sponsors, who had links to the military.

The show on Radulovitch prompts an angry response from McCarthy, who accuses Murrow of being a communist sympathizer. But instead of backing off, he gets the support of CBS boss William Paley (Frank Langella) and starts preparing for a show responding to the McCarthy smear campaign. On the show that aired March 9, 1954, Murrow said:

"We will not walk in fear, one of another. We will not be driven by fear into the age of unreason if we dig deep in our history and our doctrine and remember that we are not descended from fearful men, not from men who feared to write, to speak, to associate, and to defend causes that were for the moment unpopular . . ."We proclaim ourselves, as indeed we are, the defenders of freedom, wherever it continues to exist in the world, but we cannot defend freedom abroad by deserting it at home. The actions of the junior Senator from Wisconsin has caused alarm and dismay amongst our allies abroad, and given considerable comfort to our enemies. And whose fault is that? Not really his. He didn't create this situation of fear; he merely exploited it — and rather successfully. Cassius was right. 'The fault, dear Brutus, is not in our stars, but in ourselves.' Good night, and good luck."

This hard-hitting drama, although set in the 1950s, speaks directly to our times about the need to defend freedom at home, to give no quarter to those who are creating a fear-based society, and to encourage journalists to speak out against unchecked power. Hats off to George Clooney for giving this drama such vitality and ethical clout. And thanks to him for giving David Strathairn the juiciest role of his impressive career. We have waited a long time for this fine actor to come into his own in a major role that showcases his incredible talent. 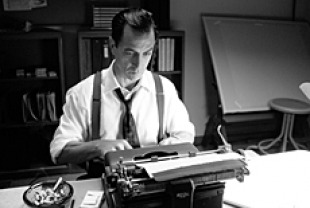 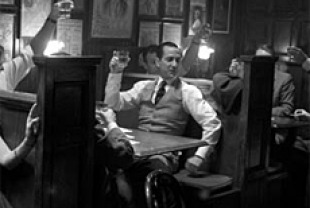 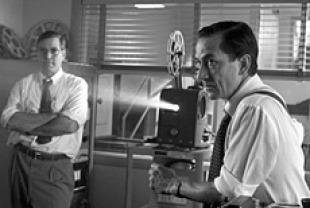 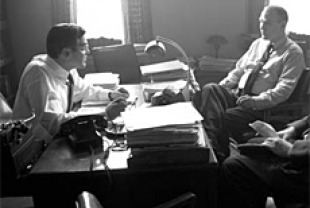