Wallace & Gromit: The Curse of the Were-Rabbit

Directed by Nick Park
A witty and wonderful clay-animated comedy that is a charmer from start to finish with its two endearing antiheroes and its clever puns and wry references to other movies.

Wallace (voiced by Peter Sallis) is an inventor with entrepreneurial aspirations — in a small English community where the citizens are garden lovers par excellence, he forms a security company called Anti-Pesto. Gromit is his canine partner who is growing his own very large melon in hopes of winning the Annual Giant Vegetable Competition. The only trouble is that this dynamic duo is too successful: they have hundreds of pesky rabbits in their basement and don’t know what to do with them. That's when Wallace comes up with a new invention called the Mind-O-Matic, which is designed to brain wash the creatures so they will have an aversion to eating vegetables. But the experiment goes awry and soon there is a gigantic were-rabbit on the loose in the community gobbling up the best and largest vegetables. The townsfolk are in a nasty snit over this development — especially Lady Tottington (voiced by Helena Bonham Carter), the sponsor of the competition. Victor Quartermaine (Ralph Fiennes), her unrelenting suitor who has a penchant for guns, wants to blow the monster rabbit away with a gold bullet, a 24-carot one no less. But she has more humane ideas for solving the problem. Others involved in handling the rampaging rabbit are the town's policeman (Peter Kay), the vicar Reverend Hedges (Nicholas Smith) and Mrs. Mulch (Liz Smith).

The U.K. based Aardman Animation's first feature for DreamWorks was Chicken Run in 2000, a delightful and zany story about freedom. This witty and wonderful clay-animated comedy is a charmer from beginning to end with its two endearing antiheroes, its puns and clever references to werewolf movies and King Kong, and its unheard of treatment of the shadow side of human beings. Nick Park, the original creator of Wallace & Gromit, and Steve Box are the directors of this zany film which was preceded by three Academy Awards for Best Animated Shorts with A Grand Day Out, The Wrong Trousers, and A Close Shave. This comedy is carried by its two lead characters — the cheese loving Wallace with his head always buzzing with new ideas and projects, and the quiet but always pensive Gromit, who's usually the one who has to clean up the messes made by his human companion. 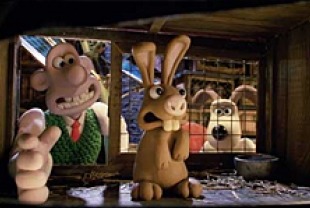 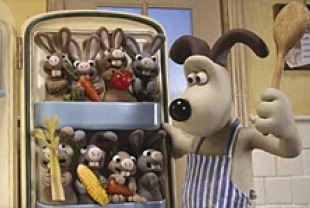 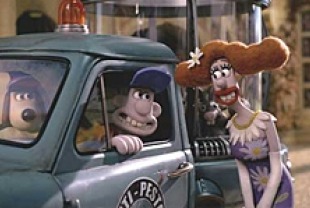