Directed by Christopher Nolan
New life for this franchise thanks to director Nolan's attention to character and storyline over stylized fights and chases.

What a relief to see the Batman saga rescued from the silly excesses and gothic dreariness of the four earlier films. Director Christopher Nolan (Memento) and screenwriter David S. Goyer have come up with a fascinating explanation for Batman's special brand of heroism.

Young Bruce Wayne watches in horror as his wealthy father and mother are gunned down on the street by a poor robber. In a fit of depression, the orphaned young man (Christian Bale) becomes a vagabond and descends into a world of crime and punishment, trying to experience it all. He is rescued from a prison by the mysterious Henri Ducard (Liam Neeson) and taken to a retreat in the snowy mountains of Asia. Bruce is trained to become a member of the League of Shadows, a vigilante organization dedicated to restoring "balance" to a world twisted by criminals who bring disorder and chaos with their nefarious deeds. His mentor tries to convince him that anger gives great power and that compassion is a weakness. But Bruce doesn't adapt well to these teachings and returns to his native Gotham City with a fresh sense of mission.

Bruce becomes Batman and is ably assisted by Alfred (Michael Caine), his father's right-hand man, and Lucius Fox (Morgan Freeman), a gifted inventor who provides plenty of tools for Batman's new mission to fight crime. Gotham City is being run by Carmine Falcone (Tom Wilkinson) and Dr. Jonathan Crane (Cillian Murphy), a nasty psychiatrist whose backers turn out to be a group of crazy zealots. Most of the police force have been bought off by Falcone, except for Jim Gordon (Gary Oldman), a cop with a conscience. The only other heroic person is Bruce's beautiful childhood friend Rachel (Katie Holmes), who is an assistant D.A. with very high ethical standards.

Nolan's attention to character and storyline instead of stylized fights and chases puts this franchise back into the running. And Christian Bale more than fills the bill as the inventive and energetic Batman.

The two-disc deluxe edition DVD includes MTV's "Tankman Begins" (a spoof of the film), concept design and development, and featurettes about Christian Bale's training for the role, the reinvention of the batmobile, creating the sets, and a documentary on the comic book genesis of the character. 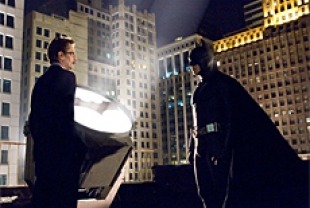