Directed by Terrence Malick
Features an endearing Native American heroine whose playful spirit and yearning for love takes her on a journey far beyond her wildest imaginings.

In the spring of 1607, three English ships journey to "The New World" and land in a part of North America inhabited by the Algonquin Indians. They are a thriving agricultural and fishing nation, and their chief is Powhatan (August Schallenberg). His daughter Pocohontas (Q' Qrianka Kilcher) is a teenage girl at the time; she is her father's favorite, with her wit and natural spunk. Her name means playful one, sportive, frolicsome and frisky. She and her brother are very close, and they are together when the English ships are first seen in the bay.

One of the Englishmen is Captain John Smith (Colin Farrell), an ambitious soldier of fortune who spent the last stages of the voyage in shackles. Sentenced to be hanged for mutiny, he is freed by Captain Christopher Newport (Christopher Plummer) who knows that his talents will come in handy in this wilderness experiment. The sponsor of the whole operation is the royally charted Virginia Company that is seeking to establish a colony in the New World. When Smith first sees Pocohontas staring at him from across a field, she strikes him as special not only because of her beauty but also because of her mystery.

Newport decides to send Captain Smith on an exploratory mission with the Indians in the region. But members of the Powhatan tribe capture him after killing all his men. Pocohontas intercedes with her father and convinces him not to execute the stranger. Captain Smith is allowed to move freely in the village. She teaches him the language and the customs of the tribe. This difficult man is stunned by the lack of competition, guile, and jealousy among the Indians.

Smith's relationship with Pocohontas is playful — almost as if it were some kind of pleasant dream. For her it is not a dream but a relationship filled with meaning, mystery, and adventure. She never knows what to expect in the time spent with him. Pocohontas has a strong spiritual life based on a reverence for the divine Mother. Her prayers take place in the natural world where she feels most at home.

Powahatan rightly senses that he is losing his daughter to this stranger and he warns her that her chief loyalties are to the community and not to her heart. When Captain Smith leaves to return to the white settlement, Pocohontas is convinced that she will see him again.

The New World is written and directed by Terrence Malick (The Thin Red Line), who is known for his meticulous attention to detail and his rigorous love of a good story that touches universal emotions. Inspired by the historical characters of John Smith and Pocohontas, he has fashioned an engaging drama about the interaction between two cultures — the Algonquins (with their rituals and closeness to the earth) and the English (with their guns and yearning for gold). The backdrop for this glimpse of the nation to come is Jamestown, the first permanent English settlement which predated the Plymouth Rock landing of the pilgrims by over thirty years.

The heart and the soul of the film is the lovely and vivacious performance by Q'Orianka Kilcher as Pocohontas. Her love for Captain Smith animates her days and crosses boundaries. When she finds out that her father is going to attack the white settlement, she warns her lover and arrives with enough food to feed the starving settlers. For her act of betrayal, Powhatan banishes her from the tribe and her family. She is exiled to another tribe and then traded to the English for a tea pot; they hope that she will keep her father from launching another attack on the settlement.

When Pocohontas arrives and is reunited with Captain John Smith, he has fallen from authority and is doing hard labor in the woods. They pick up their romantic idyll but he tires of it and realizes that his ambition to discover and explore new lands takes precedence over his feelings for her. Called back to England by the King and Queen, Captain Smith orders a friend of his to tell Pocohontas that he drowned at sea. Once she hears this news, her spirit is dashed and she slowly goes through the motions of adapting to her new life in the settlement where she lives as an outsider.

John Rolfe (Christian Bale), a widower, arrives from England and chooses to farm tobacco. He falls in love with Pocohontas, and although in her heart she still pines for Captain Smith, she agrees to marry this kind and agreeable individual whose personal loss of a wife and a child makes him patient and understanding. She takes on a new name in baptism, Rebecca, and journeys with him to England where a special meeting has been arranged with the King and Queen of England. They turn out be quite impressed with this "princess" from Virginia. Another meeting takes place that challenges Rebecca to once again determine her priorities and commitments.

Thanks to the stirring and animated performance by Q'Orianka Kilcher, we walk in the moccasins of this buoyant and playful young woman whose spiritual adventures take her way beyond her wildest imaginings. She gives all to love and refuses to give up even after all that is most precious to her is taken away. And in the end, Pocohontas does a cartwheel that signifies the jubilant quality of her soul. In the face of such a wonderful image, it is a huge waste of time to quibble over the historical accuracy of this film or to fret about its long length and slow pacing. 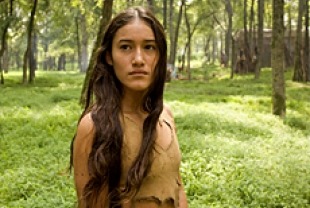 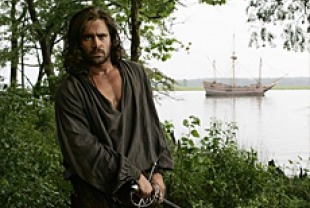 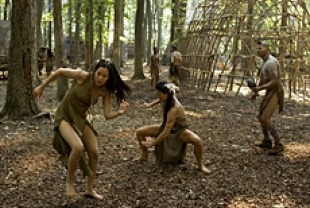 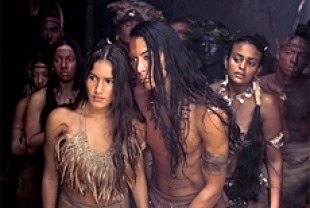 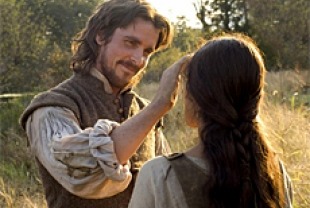