Directed by Paula Fouce
An edifying look at the lives and spiritual practices of 20 Hindu holy men in India who meditate, serve others, and take on austerities as part of their path.

In India, there are an estimated 13 million yogis who follow a path of devotion and self-sacrifice. They live on the fringes of society and practice solitude and meditation. In this beautifully photographed documentary, Paula Fouce interviews nearly twenty of these holy men — the only woman is an English speaking German who lives a simple life in her guru's special place.

They follow various austerities and physical hardships as part of their efforts to remain unattached to the world. Many of them move from place to place, but always remain close to the gods of Shiva or Ganesh. Barfani Das resides near a crematoria with his pupil who legs are badly deformed.

Although there is a yogi who has been standing upright for twelve years and another whose arm has been raised for a long time, the one who is given the most screen time is Sri Raj Giri, a wise man who is a regular pilgrim to the Himalayas. There he walks nearly naked in the snowy mountains. A believer in natural foods and regularly drinking the sacred water of the Ganges, Sri Raj Giri guides us through the initiation of a Bengali boy who is reborn in a special ritual. Yet Sri Raj Giri worries that in fifty years, yogis may well be extinct as many animal species are now.

There are many paths to God in Hinduism, and watching this documentary we realize how these yogis connect with many elements in Western spirituality. There is an emphasis on the body as a spiritual vessel that can become attuned through yoga. Death cannot be avoided: it is a helpful daily practice to confront the impermanence of all things. Since we come to earth with nothing and leave with nothing, it is helpful to live a simple life and to travel lightly. Solitude, meditation and saying a mantra are practices that bring us closer to contentment. When we give food to someone in need, it is helpful to think that we have given God something to eat. In other words, all charity is part of our devotional activity.

The final segment of Naked in Ashes centers on the Kumbh Mela festival in Ujjain, India, which is held every twelfth year. Here many of the yogis are overtaken with joy as they take off all their clothes and bathe in the river Ganges. 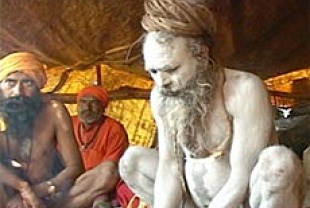