Based on a novel by David Brin, this drama is set in the year 2013 when the United States has been devastated by war and ecological disasters. Kevin Costner, who produced and directed this post-apocalypse Western, also stars as a vagabond who travels from place to place performing Shakespeare. General Bethlehem (Will Patton) and his cavalry terrorize the citizens in isolated and walled-off communities. The drifter is conscripted into this army but escapes and finds a new identity by wearing the uniform of a deceased postal worker. Claiming to be the representative of a newly restored U.S. government, the postman lifts the spirits of the townsfolk he visits.

Although some will find the mythic and patriotic tone of The Postman irritating, it celebrates the archetypal hero who inspires others and draws out the best in them. Ford Lincoln Mercury (Larenz Tate), an enthusiastic disciple of the Postman, signs up youths as postal carriers all over the Pacific Northwest. And Abby (Olivia Williams), a beautiful and tough-minded woman, encourages the Postman in his endeavors to bring people together.

This ambitious film, with stunning photography by Stephen Windon and stirring music by James Newton Howard, emblazons hope as a powerful spiritual force. The capacity to visualize a better future is a nation's most important resource. 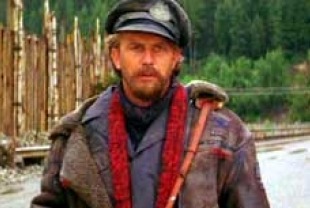