Directed by Alan Rickman
A warm and winning film about the blessings of human connections.

The cold and the wind of winter require us to be strong, and they also encourage us to watch out for others. In his debut as a director, British actor Alan Rickman has adapted Sharman Macdonald's play The Winter Guest for the screen. It is a quiet, quirky, and luminous film about one day in the lives of four sets of characters in a Scottish seaside town. Nothing much happens except the miracle of human nurturing as one soul looks after another in the name of love or friendship.

Elspeth (Phyllida Law) arrives to spend some time with her grieving daughter Frances (Emma Thompson), a photographer whose husband has died. While these two take a walk and wrestle with past misunderstandings, Frances's teenage son Alex (Gary Hollywood) is seduced by Nita (Arlene Cockburn), a sexually precocious neighbor. However, just like his mother he's haunted by his father's presence in the house.

While Chloe (Sandra Voe) and Lily (Sheila Reid), two elderly women, attend a funeral and share a pastry with each other in a restaurant, two young boys (Sean Biggerstaff and Douglas Murphy) rescue two abandoned kittens during their holiday from school. In the simple pleasures of a warm fire, holding on to another's arm for support, a photograph at just the right moment, and the gentle art of foot washing, these characters care for one another. The Winter Guest is a warm and winning film about the blessings of human connections. 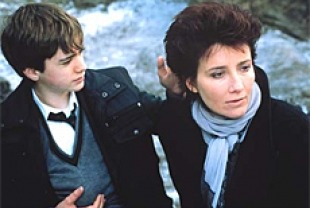