Directed by John Sayles
This provocative film challenges us to leave behind the cocoon of our cosseted lives and confront those meanings that hold the key to life and death.

Both ancient and modern questers have gone on arduous journeys to burst the spirit's sleep and to discover the deeper meanings of their lives. John Sayles's Spanish-language drama shot in Mexico stands in that noble tradition. This substantive and serious drama is one of the best films of 1998.

Dr. Fuentes (Federico Luppi) is a wealthy physician in an unnamed Latin American country. Nearing retirement and concerned about his legacy, he decides to go visit the medical students he trained to serve poor villagers in the countryside. After an isolated life in the city where he was indifferent to the political struggles of his times, the doctor is now exposed to the harsh exigencies of civil war. Hundreds of men, women, and children, have been slaughtered by the army or the guerrillas, known simply as the "men with guns."

As the doctor tries to determine if his students have met this fate, he is guided by a young orphan boy (Dan Rivera Gonzalez) wise beyond his years. He learns more about torture and murder when a bitter army deserter (Damian Delgado) and a guilt-ridden priest (Damian Alcazar) join them on an odyssey to a rumored safe place in the high mountains. They also encounter two American tourists (Mandy Patinkin, Kathryn Grody) who are oblivious to the human rights violations in the country they are travelling through.

The difficult outward journey of Dr. Fuentes through sugar cane fields, a coffee plantation, the ruins of ancient empires, ravished jungle villages, and a mountain rain forest mirrors an equally challenging inner quest. This is a story of soul-making. The good doctor's experiences eventually open his eyes and soften his heart.

Men With Guns reiterates a theme of several other films by John Sayles (Lone Star, City of Hope, Matewan) — we must break down the walls that keep us isolated from others. The filmmaker challenges us to leave behind the cocoon of our cosseted lives, to cross borders into alien worlds, to stand in solidarity with the poor and the dispossessed, and to confront those meanings which hold the key to life and death. 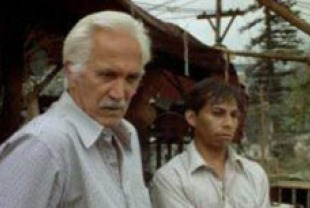 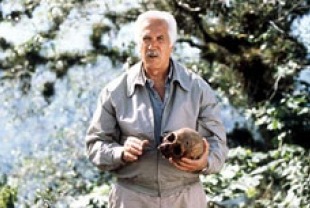