Directed by Hal Hartley
A black comedy about creativity, politics, publishing, and mentors that is unflinching in its respect for oddballs.

The complexities and weirdness of popular culture provide the backdrop for this black comedy about creativity, politics, publishing, and mentors. Writer and director Hal Hartley has fashioned an idiosyncratic drama that is unflinching in its respect for oddballs.

Simon Grim (James Urbaniak) is a shy garbageman who supports his depressed mother (Maria Porter) and his hedonistic sister (Parker Posey). His routinized existence is upended when he lets Henry Fool (Thomas Jay Ryan), a self-absorbed stranger with an unsavory past, take up residence in the basement of their house. Henry is convinced that he has written a masterwork that will one day be acclaimed; he persuades Simon to try his hand at writing as well. The surprising result is a book-length poem that wins the hearts of most Americans when it is posted on the Internet

Although writer and director Hal Hartley has fun skewering a pretentious publisher and some straight-arrow types who find Simon's work to be pornographic, the real heart and soul of the film deals with the interesting dynamics in the relationship between the poet and his bohemian mentor. Henry Fool is an extreme but always fascinating exploration of creativity. 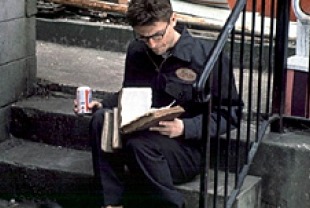