Directed by Peter Weir
A quixotic tale speaks to our yearnings to explore a wider world and find the kind of love that makes our heart turn somersaults.

This thought-provoking and intricately-structured film directed by Peter Weir and written by Andrew Niccol is tailor-made for our era of celebrity spectacles, theme parks, and the incursion of pop culture into all aspects of our lives. In America, everything is entertainment, the show must go on, and we all have our parts to play. We sell the world the packaged fantasies of consumer bliss, small-town friendliness, safety, and uniformity.

Truman Burbank (Jim Carrey) is a mild-mannered insurance salesman in Seahaven, an idyllic island community, who is the unknowing star of a 24-hour-a-day soap opera in which he is the only "real" character. His perky wife (Laura Linney), his steadfast best friend (Noah Emmerich), and his solicitous mother (Holland Taylor) are actors, and his town is populated by extras.

Truman is not far off the mark when he muses that it seems the whole world revolves around him. Five thousand miniature cameras concealed in everything from a car radio to a desktop pencil holder capture his every move. Audiences from all parts of the planet have been watching his fishbowl life for 30 years. The creator of the longest running documentary soap opera in history is Christof (Ed Harris), a control freak who is convinced that he has given Truman "a chance to live a normal life." To him, the world outside his giant sound stage is the sick one.

But eventually, even this seemingly seamless world begins to crack, and Truman, recognizing his own unhappiness, decides to make a mad dash for freedom. His quest speaks to the yearnings we all have to explore a wider world, to smash our self-imposed chains of fear, and to find the kind of love that makes our heart turn somersaults.

Weir and Niccol allow us to create in our imaginations Truman's ultimate fate. The film is summed up by a question on a pin worn by the one woman who sends our hero into a swoon of enchantment: "How will it end?" Just in time for the new millenium, this quest is as much about us as it's about Truman.

Special features include: "How's It Going to End? The Making of the The Truman Show," Parts 1 and 2; visual effects; 4 deleted scenes; a photo gallery; 2 theatrical trailers; and 2 TV spots. 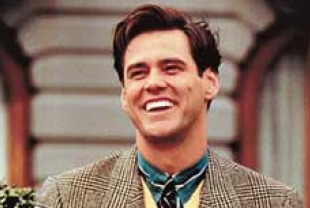