Directed by Randall Miller
Shows how dancing becomes a route to personal transformation for a man mired in mourning.

Ann Linnea in Deep Water Passage has observed: "The cycle of grief has its own timetable. Until that cycle is honored and completed we are moving along life's path with an anchor down."

In this drama written and directed by Randall Miller, a young man has severely curtailed his life while mourning the painful loss of his wife, who committed suicide. Day by day, he speaks to her ashes, which are in an urn on the mantelpiece alongside the ashes of his dog. Frank Keane (Robert Carlyle) is a baker whose closest co-worker wants him to get out of his routine and experience something new. That wish may explain what happens next.

Driving on the freeway, Frank comes upon a crashed car and pinned inside is Steve Mills (John Goodman). The two talk while waiting for an ambulance. Steve was on his way to a Charm School reunion to see Linda, his childhood sweetheart from 40 years ago. On the way to the hospital, he unspools the story of attending this ballroom dancing class as a young boy (Elden Hensen) and changing his ideas about the opposite sex. Frank, who knows that Steve is dying, decides to stand-in for him at the Charm School.

Arriving there, he has no luck finding Linda who stole the eight-year-old boy's heart. But Frank's own heart does a flip-flop of delight when he finds himself in sync with the music and the evening's festivities. The Hotchkiss School, is now run by Marianne (Mary Steenburgen), the late founder's daughter. She singles him out and he enjoys the adventure, much to the displeasure of Randall (Donnie Walhberg), who is used to having the eyes of all the women on his dancing moves. His stepsister Meredith (Marisa Tomei) seems quite taken with Frank who decides to join the class as a regular. When he tells his male grief support group about all this, they are quite surprised at his daring move out of the ordinary.

"Dance is the first, most ancient, and most enduring form of religion," Diarmuid O'Murchu, a priest and sociologist has stated. "Long before religion was ever taught, preached, or codified in sacred texts, it was lived and celebrated in ritual play and dance." In cultures all around the world, people use dance to dispel their troubles and to express emotions that are too deep and complex for words. That is exactly what happens to Frank as he finds within the tango and the cha-cha the elixir to pull him out of his low-grade depression. He reaches out to Meredith in a transformation that suits him well.

Although Miller's movie does not have the magic and the flare of the Japanese gem on the same theme, Shall We Dance, it does possess its own small charms, making us all believers in the firepower of dance to renew the spirit. 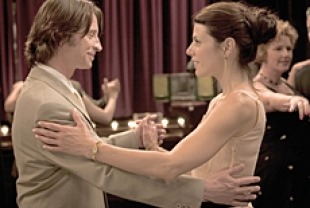 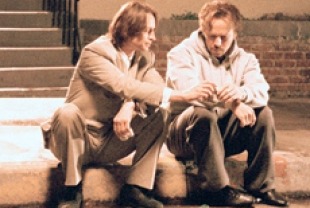