Directed by Thomas Vinterberg
An oddly compelling meditation on the American fascination with guns and the trigger of fear that makes them so dangerous.

Dick (Jamie Bell) is a lonely kid who is growing up without a mother in a dingy town. His father is a miner who wants him to become one too, but the sensitive lad is saved by his black nanny Clarabelle (Novella Nelson), who is convinced that he is destined for a more meaningful life. The transformation in Dick's life comes when he purchases a small handgun that he names Wendy. Another youth, Stevie (Mark Webber), shares his fascination with guns. They are empowered by these tools of destruction, even though they are pacifists.

The two decide to start a club with three other lost and lonely misfits in the town: Huey (Chris Owen), a cripple; his younger brother Freddie (Michael Angarano), who is always getting beaten up; and Susan (Alison Pill), who works at a crummy second-hand store than smells. Dick takes them to a deserted mine shaft which becomes the "temple" for their secret society dubbed The Dandies. Here they shoot their guns and study firearm injuries and the history of men and guns. They vow to carry their guns as moral supports but never to brandish them.

The town's police chief (Bill Pullman) wants Dick to do him a favor and serve as an informal parole officer by looking after Sebastian (Danso Gordon), Clarabelle's grandson, who has shot someone. Dick's social experiment has brought about changes in the lives of every member of the Dandies, but now a new element enters the scene. He learns from Sebastian that Clarabelle is so frightened of street gangs that she is unwilling to venture outside. Dick decides that they should serve as her escort service when she goes to visit a relative. The new ingredient is the old woman's raw fear and its dire effect on everyone around her.

Thomas Vinterberg (Celebration) directs this parabolic film based on a screenplay by Lars Von Trier (Dogville, Manderlay). The story works its magic by enabling us to see how the unholy connection between guns, power, fear, and violence can spawn unexpected consequences. Von Trier and Vinterberg give us a chilling portrait of a nation gone wacko with guns and idealism. That is a dangerous brew not only for Americans but for people around the world who are frightened of our firepower. 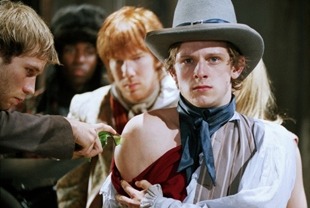