Directed by Kelly Reichardt
An evocative and melancholy portrait of two men whose friendship has run its course.

Mark (Daniel London) receives an unexpected call from Kurt (Will Oldham) inviting him for a weekend camping trip outside Portland, Oregon. He has found a really peaceful spot with hot springs. Mark's pregnant wife (Tanya Smith) doesn't really want her husband to go but knows that he will anyway. The two friends haven't really kept up with each other. Kurt is unemployed and facing eviction, but his spirits are lifted by just seeing Mark.

They talk about a lot of things. Mark shares about his parents. Kurt describes a "transformative" time spent in Ashland. They both lament that one of their favorite spots, an independent record shop called Sid's, has been turned into a health drink-bar called "Rejuicenation." Nothing stays the same.

Sitting by the fire in the woods, Kurt tells Mark that he is attending night classes on physics and has a theory that the universe is in the shape of a falling tear. His friend listens but has little response. Mark says he is looking forward to fatherhood but Kurt can't wrap his mind around that. Then out of the blue, he tells his old buddy that something has come between them that he wants to go away. Mark denies that anything has changed, and Kurt reluctantly agrees.

Kelly Reichardt directs this poignant drama about a friendship that has run its course. Jonathan Raymond has adapted the screenplay from his own short story. When Mark is driving to meet Kurt, he listens to a radio show discussion of Lyndon Johnson, the Civil Rights movement, and a Southern strategy. Later the broadcast moves into contemporary times and the alienation that has settled over the country like a fog. We sense that Mark and Kurt were once on the same path but now live in very different worlds and have little in common except vague memories of the past. They do share a fondness for the natural beauty of the Pacific Northwest. They are glad to get out of the city although Kurt mentions that since there are trees in the city and garbage in the woods, it is "all one thing." Meanwhile, Mark's dog joyfully romps in the woods on his own.

In Chinese Zen, the concept of intimacy is synonymous with enlightenment or realization. Through sharing with friends, we reach out and discover parts of ourselves that have been hidden. It is a way of coming to know ourselves and our world. But friendships do not last forever and their passing is a source of sadness. To cling to them is to deny the fragility and impermanence of these relationships. Mark has already let go and moved on to his new life. Kurt wants to hold on to something he has cherished for years. Our hearts go out to him as he wanders around in Portland, a lonely young man whose main source of intimacy has dried up and left him truly homeless. 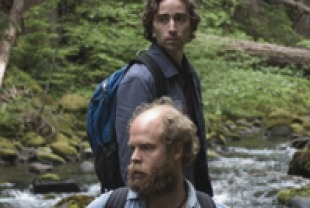