Directed by Laura Poitras
The heroism of a busy Sunni doctor in Baghdad running for parliament in Iraq's January 30, 2005, election.

One of the many invaluable services provided by documentaries is that they open our minds to perspectives that we don't usually see. Such is the case with this enlightening work by Laura Poitras. She focuses on the Iraqi elections of January 2005 giving major attention to Dr. Riyadh, a medical doctor and father of six who is a Sunni candidate for the parliament. The time frame covered is six months.

We see the busy doctor at work in a free medical clinic in Adhamiya, a neighborhood of Baghdad. He is a critic of the American occupation and in one scene visits a prison to make a list of those with dire medical conditions. He discovers a nine-year-old boy among those behind a barbed wire fence. The doctor is worried from the outset that the Iraqi Islamic Party, the largest Sunni group, will boycott the election. Poitras does a fine job conveying this Muslim's rigorous devotional life and his commitment to justice. He also empathizes with a friend whose son is kidnapped by the mujahideen.

At the same time, the director presents the occupiers' approach to Iraq's first democratic election in 30 years. Speaking to Iraqi election police, a U.S. military spokesperson says, "You folks are going to be on television all over the world. You have a front row at one of the best shows that's going to be in the world." An Iraqi in the group seems perplexed that this election is being pitched as an entertainment show produced by the West.

Another American officer reveals the kind of cross-cultural stupidity that is typical of his Washington superiors by stating that he doesn't care whether Denmark thinks the elections are fair, only whether "Joe Iraqi" does. Even more shocking are the attitudes of the security contractors who have been hired to supervise the elections instead of having the U.S. military do it. My Country, My Country does not paint the military nor the contractors as liberators; the only hero here is the good doctor whose faith, love of country, and service of others is portrayed in stark contrast with the outsiders' actions and attitudes. 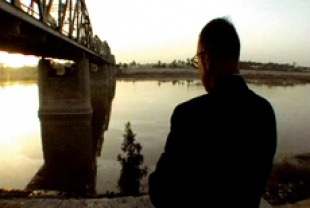