Directed by Nicole Holofcener
A relaxed and realistic portrait of four middle-aged women friends dealing with fragility of their lives and relationships.

"The disappointments of midlife," according to Dr. David Brandt, a psychologist, "all revolve around one central theme — 'Now that I know what it's really about, I'm disappointed that that's all there is.' The other disappointments of this period in love, work, family and level of accomplishment, and loss of beauty and youth are merely variations on this theme. Midlife disenchantment is essentially a crisis of disillusionment. We have lived over 50 percent of our allotted time only to find that the illusions we have treasured since childhood have all been maimed or destroyed by uncompromising reality."

In her third film about women, Nicole Holofcener (Walking and Talking, Lovely and Amazing) continues to impress with this relaxed and realistic portrait of four friends in Los Angeles dealing with the fallout from middle age.

Franny (Joan Cusack) has inherited lots of money and with the support of her husband Matt (Greg Germann) is involved in many charities. Their affluent lifestyle allows them to spend $95 on shoes for their young daughter, donate several million dollars to a school, and buy a table for themselves and their friends at an fundraising party. Franny's best friends are a little miffed about her wealth.

Jane (Francis McDormand) is a successful fashion designer married to Aaron (Simon McBurney), and they have a young son. Christine (Catherine Keener) and her husband David (Jason Isaacs) work together as screenplay writers; they have enough money to build a second floor on their house. The neighbors, whose views are being destroyed by the construction, are less than pleased about this act of colossal selfishness.

Olivia (Jennifer Aniston) hasn't been able to match the success of her three friends. She has gone through a bad patch recently that forced her to leave a teaching job. In addition, Olivia can't seem to leave behind a love affair with a married man. She still calls him regularly just to hear his voice. Now she is cleaning houses, and this career choice causes a considerable amount of criticism and embarrassment among her friends. Jane laments: "She's unmarried, a pothead, and a maid."

Franny talks her personal trainer Mike (Scott Caan) into going out with Olivia on a blind date. He then decides to come along when she cleans; it turns him on to have sex in strange homes. Olivia is so confused about what to do next that the only thing she can come up with is to learn how to become a personal trainer. When she asks Franny for $1800 to fulfill her latest dream, her rich friend is understandably reluctant to give her the money.

The best thing about Friends with Money is all the telling details in the lives of these four unhappy middle-agers. Jane carries the heaviest bag of burdens brought on by her age and the thought that there's no more wondering what is going to happen next. This apprehension has compelled her to stop washing her hair and to break into rages when someone takes her parking spot or skips ahead of her in line. Christine, meanwhile, has discovered that her hypercritical husband doesn't really care about her feelings.

Money has come between these four friends but so have the changes in their lives that have made them aware of the fragility of their relationships and their mortality. Comparisons and criticism — every get-together is followed by a catty debriefing — constantly threatens their friendship. What they need is a little equanimity, the perfect spiritual practice for those constantly impaled on their feelings of regret or great expectations.

Special DVD features include behind-the-scenes, the Sundance Film Festival featurette, the Los Angeles Premiere featurette, and a commentary by the filmmaker. 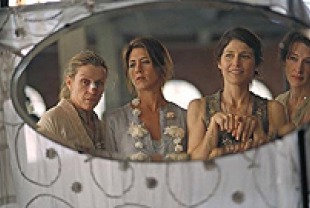 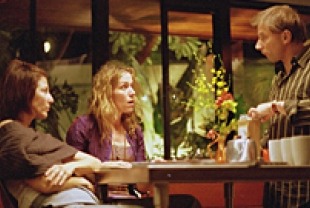 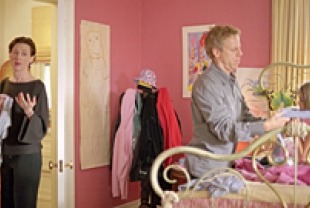