Directed by Deepa Mehta
An extraordinary film which depicts the plight of Indian widows and their yearning for liberation.

Water is the final film in a trilogy by director Deepa Mehta. Fire centered around two married women, ignored and neglected by their husbands, who fall in love with each other. Earth focused on how the relationships among a group of Hindu, Muslim, and Sikh friends are tested during the partition of Pakistan and India.

Water is as poignant and moving as the other two, and as controversial in India. Set in 1938 in the holy city of Benares, India, it focuses on the deprivations experienced by Hindu widows, still an issue today in a country with 33 million widows. When Mehta started making this movie in Benares, Hindu fundamentalists protested, claiming that the film was anti-Hindu. She was forced to shut down the production and start over a year later in Sri Lanka.

The Manusmriti, an ancient Hindu text, says that in life a woman is half her husband and if he dies, she is half dead. A widow has three choices: she can throw herself on his funeral pyre and die with him; she can marry his brother, if one is available; or she can live out the rest of her days in isolation and seclusion. If she chooses the latter, the ascetic path, she enters an ashram, shaves her head, wears white as a sign of mourning, and tries to atone for her husband's death.

In the film, Chuyia (Sarala), an adorable eight-year-old, has just been widowed. Her marriage, which she doesn't even remember, was arranged by her family for financial reasons. But no matter what her circumstances, Hindu law says she must now leave society, and so her parents take her to a decrepit ashram where widows of all ages live together. The little girl's hair is clipped, and she is dressed in a white robe. She sleeps on a thin mat in a room with older and infirm women whose lonely lives have been spent in renunciation. They sing religious hymns every day and beg on the streets for money. People avoid them like the plague; many Hindus believe that if they bump into a widow, they will be polluted and must do rituals of purification.

Although Chuyia wants to return to her mother and doesn't really understand what has happened, she begins to adapt to the dreary rhythms of her days. Shakuntula (Seema Biswas), a devout Hindu, takes the little girl under her wings. Chuyia's heart goes out to Patiraji, an old crone whose fondest memory is of eating sweets at her wedding when she was a child. She tells her, "Life is so disappointing."

Then Chuyia meets Kalyani (Lisa Ray), a beautiful young widow who has been forced into prostitution by the head of the ashram, Madhumati (Manorma). She is the only one who has been allowed to keep her long hair, and the other widows shun her. But the money she brings in keeps the place afloat. The eunuch Gulabi (Raghuveer Yadov) regularly takes her to the homes of rich Hindu gentry, many of whom are married. Kalyani befriends Chuyia and invites her to visit the second floor of the ashram and play with her dog.

Through Chuyia, Kalyani meets Narayan (John Abraham), a law student from a wealthy Indian family who is an ardent believer in the civil disobedience campaign of Mahatma Gandhi. This religious leader has begun to speak against the harsh treatment of women and the caste system, angering Hindu fundamentalists. But to the widows and other outcasts, he is a beacon of hope.

Narayan falls in love with Kalyani who yearns for a lover who will respect her. She sees herself as a lotus untouched by the filthy water it grows in and dares to imagine a better future. Their romance plays out against the backdrop of the rain water and the sacred water of the Ganges where people bath, do rituals, and send the ashes of the dead. Shakuntala is one of those who spends most of her time by the Ganges. When she learns from her guru a law has been passed allowing widows to remarry, she realizes that there might be a future for Chuyia other than her constricted and sad life.

In an interview, Deepa Mehta stated: "Water can flow or water can be stagnant. I set the film in the 1930s but the people in the film live their lives as it was prescribed by a religious text more than 2,000 years old. Even today, people follow these texts, which is one reason why there continue to be millions of widows. To me, that is a kind of stagnant water. I think traditions shouldn't be that rigid. They should flow like the replenishing kind of water."

Water is one of the best movies of the year. It depicts the terrible damage that can be done to the human spirit when chauvinistic religious rules and texts are treated as sacrosanct. The inhumane treatment of widows in India by Hindu fundamentalists is similar to the subjugation of women by fundamentalist Christians, Jews, and Muslims elsewhere. It is appalling to see religion used to deny the dignity and rights of women. Deepa Mehta has done all women an immense service by making this extraordinary film about the liberation their sisters yearn for with their hearts, minds, bodies, and souls. 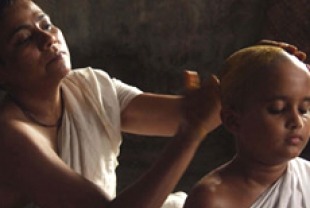 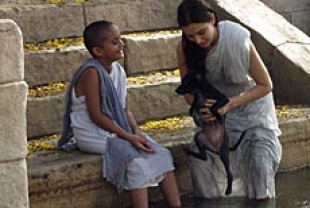 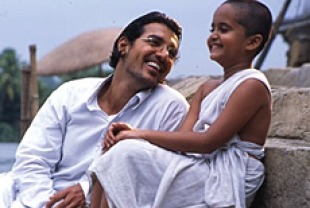 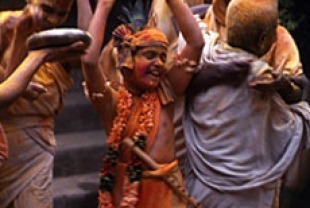