Directed by Eran Riklis
An extraordinary Israeli film that highlights the spiritual potencies of hospitality and forgiveness.

Weddings are social gatherings where emotions run high. People bring to this festive occasion so many feelings about men and women, families, past experiences, future possibilities, and religious beliefs — all of which combine in a heady mixture of joy, sadness, memory, and anticipation. Of course, the details that go into this event are staggering, especially handling the relatives and friends. All of these ingredients are present in Eran Riklis's extraordinary film The Syrian Bride.

The bride and groom are Mona (Clara Khoury) who lives in a Druze village in the Syrian Golan Heights, which has been annexed by Israel. The groom is Tallel (Derar Sliman), her cousin who is a television star in Syria. Once she crosses into Syria on her wedding day, she will never be able to return to the Golan Heights to visit her mother, father, sister, and brothers. Imagine the complications that ensue as the two families and other well-wishers gather at the border of Israel and Syria. Similar in spirit to the documentary Checkpoint, which is set in the West Bank, this story reveals the ways in which bureaucracy, racial hatred, pride, and prejudice trump human kindness. It's all the more unfortunate when we see it happening during a wedding.

There is a mixture of sadness and joy in Mona's heart as she prepares at home for the trip to the border. Her father Hammed (Makram J. Khoury) is a political militant who has been in prison for many years and is under the watchful eye of Israeli security. He is upset about Mona's departure but even more so about the arrival of Hattem (Eyad Sheety), his eldest son who broke with tradition and married a Russian doctor (Evelyn Kaplun). When he returns after an eight-year absence with his wife and young son, Hammed cannot bring himself to acknowledge his presence. His other son, Marwan (Ashraf Barhoum), is a womanizer who lives in Italy and tries very hard to impress everyone with his success as an import-export entrepreneur.

The person who plays intermediary in the family is Mona's older sister Amal (Hiam Abbass), a feisty woman who has two daughters and has enraged her chauvinistic husband Amin (Adnan Trabshi) by frequently wearing pants against tradition; she has also just gained entry into Haifa University to study social work. Amal visits the police chief and unsuccessfully tries to convince him to allow Hammed to accompany his daughter to the border even though this violates his parole. She also tries to calm Hattem down when he criticizes his father's chilly treatment of his wife and son.

But all of these interpersonal frictions pale in comparison with what happens at the border when a Syrian official refuses to accept Mona's passport because it contains an Israeli stamp (Syria has never recognized Israel's right to the Golan). Jeanne (Julie-Anne Roth), a Red Cross go-between, carries the document back and forth from the Israeli officer to the Syrian one, trying her best to work things out and break the deadlock that ensues as both officials grow more inflexible. A laid-back wedding photographer tries to bring some lightness to the situation and at one point says to Mona, "Marriage is like a watermelon. You don't know what it's like until you open it up."

Eran Riklis, the director, does a marvelous job orchestrating all the tensions in this engaging drama. He and Suha Arraf, a Palestinian co-screenplay writer, bring an open-mindedness to all of the characters in this highly charged political setting. Hiam Abbas as Mona's sensitive sister and Makram J. Khoury as the family patriarch give top-drawer performances that compel us to think more seriously about the spiritual potencies of hospitality and forgiveness. Don't miss The Syrian Bride, a wedding movie unlike any other ever made!

Special DVD features include a commentary by director Eran Riklis, an interview with actor Hiam Abbass, and a "Making of the Film" featurette. 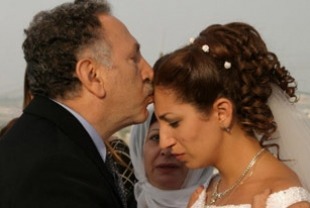