Directed by Arthur Penn
A screen classic about Helen Keller and her teacher who helped her break out of the prison of darkness and silence.

In 1953 William Gibson read Helen Keller's autobiography The Story of My Life and was deeply moved by it. How could he translate this true story of human determination and caring into a memorable work of art? Gibson wrote it up as a ballet with a verse accompaniment but could find no one who was interested in producing the story in that form. He then wrote "The Miracle Worker" as a teledrama; it had its premiere on February 7, 1957 on "Playhouse 90." Patty McCormack starred as Helen Keller and Teresa Wright played her teacher Annie Sullivan.

With some changes, the TV adaptation became a play and opened on Broadway on October 19, 1959. Patty Duke was Helen Keller and Anne Bancroft was Annie Sullivan. In 1962, Arthur Penn directed this film version of the play using the same two actresses in the lead roles. Through each of these versions, more and more people have come to treasure the beauty and truth in this story of one young girl's passage out of the arena of unspeakable emptiness into the awesome realm of human communication.

Helen Keller is born on June 27, 1880, in Tuscumbia. Alabama, to Arthur Keller, a newspaper editor, and Kate Adams, his second wife. When she is a baby, Helen is stricken by a mysterious fever which leaves her blind and deaf. In the next few years, her parents seek help from a variety of specialists — all to no avail.

They choose Annie Sullivan, a governess from the Perkins Institute for the Blind in Boston, to work with Helen. This stubborn young woman believes that she can bring her young charge out of her airless and dayless prison world. Annie finds that Helen is prone to uncontrollable flayings about and spasms of baffled rage. It is clear that they need to get away from the family. The Kellers give the teacher two weeks alone with the child in a garden house on their property. Annie works with Helen on the alphabet of touch and by the end of two weeks she can dress herself and eat with a fork. In the absence of distractions, the teacher is able to exercise control without breaking Annie's spirit.

Annie Sullivan once said that she had to have the strength of a piano mover, the determination of a Prohibitionist, and the delicacy of a poet to work with Helen. The dramatic high point of the film comes at the water pump when Helen breaks out of her prison of darkness and silence. Throughout her life, she had immense respect and love for her " Teacher." The way she used the term was similar to a Hindu understanding of "guru" — a counselor who helps another person become all he or she was meant to be. 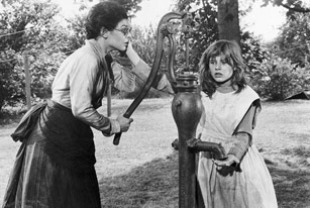