Watching the evening news, you'd think that men and their weapons is the way of the world, but there is another path — the path of peace and the loving embrace. This is what Sri Mata Amritanandamayi Devi, better known as "Amma," offers the world. She is an Indian mahatma who has brought her message of divine compassion to some 30 million people (and counting) through heartfelt hugs and many blessings. In this extraordinary documentary by Jan Kounen, we are given an up-close and personal portrait of this holy women who in 2002 received the Gandhi-King Award for Non-Violence; previous recipients were Nelson Mandela, Kofi Annan, and Dr. Jane Goodall. The film includes a clip from this moment when she received a standing ovation at the U.N. in Geneva, Switzerland.

Born in 1953, the daughter of a poor fisherman, Amma was caught up in spiritual ecstasies at an early age. Kounen visits her ashram situated on a peninsula between the Sea of Oman and the lagoons of Kerala. Here devotees gather for prayer, meditation, and chanting. Two English speaking women share their respect for Amma's ability to incarnate unconditional love for all people and things. One talks about the peace of mind she has achieved over the years in her company, and the other is happy to be of service to others in a life of self-sacrifice.

Whereas many gurus emphasize only inner exploration, Amma has also created a vast network of programs to help the poor and needy. She has raised money to build over 100,000 homes for the indigent as well as a 1300-bed hospital where the services are free of charge to those who no money. She has built orphanages, hospices, and clinics. In one scene, she laments that violence, war, selfishness, and greed are propelling humankind "in the wrong direction." So much more could be done in the name of love and peace and compassion.

The filmmaker follows Amma and her entourage on a bus tour through India where she visits some of her projects and reaches out to more people with her hugs and blessings. In one scene, Kounen shows her rocking in a devotional moment followed by a clip in which she is on a swing with two children, enjoying herself. Amma comes across as a contented person who melds devotional closeness to God with a playful spirit. She smiles easily and often. During a celebration of Krishna's birthday, she pulls an elderly woman down on her lap and the two laugh together.

In a speech to her followers, Amma laments that our television screens are getting bigger while our hearts are becoming smaller. Not hers. She only sleeps a few hours every night and has the energy to reach out to thousands in long sessions. The many scenes of Amma hugging and listening and talking to men, women, and children vividly convey the hunger that people have for intimacy in a world of fear and separation. Her nurturing presence offers a refuge and an oasis from loneliness and disappointment. Looking at the ecstatic face of a young girl who is caught up in a mystical moment in Amma's presence, it is easy to understand why so many wait patiently in line for hours for her tender embrace.

More than anything else, Amma's ministry is an example of the importance of the Sacred Feminine at this point in time when the masculine values of war, power, and authority are so predominant and causing so much human suffering around the world. 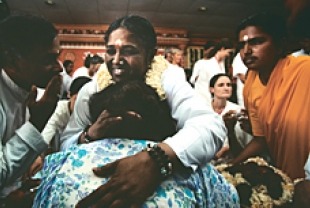 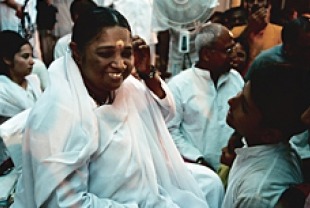 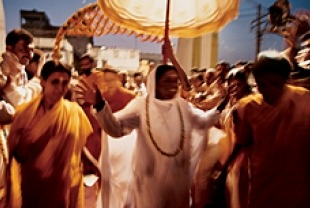