Directed by Edward Burns
Catches the loss and the loneliness of two men who are unwilling to let go of the past and step into a new day; one of the best films of the year.

Somewhere is the world at this very moment a man is waking up to find that his wife has left him after many years of marriage. At first he will not be able to wrap his mind around this news. Another husband is waking up with feelings of overwhelming grief over the recent death of his wife. Both men will stagger to the breakfast table and eat without paying attention to what they are doing. One tortures himself with questions and self-recrimination while the other just tries to make it through the day without weeping. Both men know that in other parts of the world children are dying of hunger and innocent civilians are being blown to pieces in wars. But they are eating their own bowls of pain and the loss they feel is genuine and worthy of our empathy.

Writer and director Edward Burns (The Groomsmen) has creatively and compassionately fashioned an engaging drama about two men who are thrown together by circumstances beyond their control. Jack (Edward Burns) is an out-of-work detective who lives in New York City. He is still mourning the death of his wife, and it shows in his hangdog physical demeanor and his aversion to being in the presence of couples in public places. A concerned friend gives him a client from upstate New York whose wife mysteriously disappeared six months ago. Abe (David Krumholtz) is a baseball coach who loves his job and has played the role of a Good Samaritan to a troubled young boy on the team.

The two men are as different as night and day. Jack is moody and very critical of the America's political leaders and, like his father before him, has a special place in his heart for small businessmen and entrepreneurs who spit in the face of the rich and the powerful. He secretly envies those who have a lot of money and spends far too much time lamenting his poverty.

Abe, on the other hand, says that he eats, drinks, and sleeps baseball. He is a very happy man except for Kitty, the love of his life, walking out on him. He is determined to find her and convince her to come home. Both Jack and Abe are unable to let go; they are attached to the past and frightened of the future.

Jack and Abe become friends as they walk the streets of New York looking for clues that will lead to Kitty. They have a picture of her seated around a table with a rock star called Ron Stewart. Abe, when he is on his own at a bar, meets a drunk lady who makes advances toward him. He also spends a pleasant evening at Jack's place with his super who turns out to be a baseball fan and a desperately lonely young man. It's almost as if Abe's loneliness attracts other lonely souls. Jack has his own demons to bear, evident when he visits his wife's grave and when he has sex with a pretty woman who lives across the hall from him.

There are millions of stories that could have been made about lost and lonely individuals. The inspiration for Looking for Kitty came when Burns was watching Midnight Cowboy, one of his favorite films. Thank goodness he acted upon the impulse to create a character- driven film about the complicated dynamics of suffering and loss in the lives of two men. In Unattended Sorrow, Steven Levine writes: "Nothing is more natural than grief, no emotion more common to our daily experience. It's an innate response to loss in a world where everything is impermanent. We don't know what to do with our pain, and we never have. We have been told to bury our feelings, to keep a stiff upper lip, to 'get over it and get on with our lives' as though loss were not an inevitable part of life. As a result, our sorrow goes unattended and manifests itself in many unexpected ways."

In many surprising ways, Jack and Abe turn out to be good medicine for each other. Thanks to the top-drawer performances by David Krumholtz and Edward Burns, this extraordinary drama is also good medicine for us. It enables us to walk a mile in the shoes of two men who learn through their encounters to let go of the past and to take some tentative steps into a brand new future. 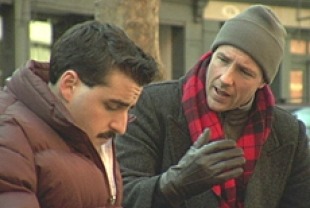