Directed by Darren Aronofsky
A spiritual movie set in three centuries about death, the tree of life, the fountain of youth, and love that will not let us go.

We are afraid of death and will do anything to avoid the subject. It is not handled very much in movies, except in horror flicks or crime dramas where the treatment is usually violent and sensational rather than sensitive or thought-provoking. One of the great gifts of spiritual individuals is that they are able to die gracefully, with a minimum of fear or anger. We grew up with Dylan Thomas's poem that advises "Do not go gentle into that good light. . . . rage, rage against the dying of the light." And that is certainly a familiar approach. But there is another one. We think of a quote by Peter Matthiessen, a Buddhist: "My ambition is to die the way a ripe fruit lets go of a tree."

Darren Aronofsky's new film is a spiritual movie about death, the tree of life, the fountain of youth, and abiding love. The director has already made two quirky films that have gotten him a lot of attention: Pi, which won the Director's Award at the 1998 Sundance Film festival and an Independent Spirit Award for Best First Screenplay, and Requiem for a Dream, which was named on more than 150 Top-Ten lists for 2000. Aronofsky has said of The Fountain:

"The desire to live forever is deep in our culture, Every day people are looking for ways to extend life or feel younger. Just look at the popularity of shows like 'Extreme Makeover' or 'Nip/Tuck.' People are praying to be young and often denying that death is a part of life. Hospitals spend huge sums of money trying to keep people alive. But we're become so preoccupied with sustaining the physical that we often forget to nurture the spirit. So that's one of the central themes I wanted to deal with in the film: Does death make us human, and if we could live forever, would we lose our humanity?"

In The Fountain, writer and director Aronofsky has interwoven three stories from three centuries. It takes a while to get the hang of it, as the drama goes back and forth between the periods. In the twenty-first century, Tommy (Hugh Jackman) is a desperate scientist who is doing experimental surgery on monkeys hoping to find a cure for his wife Izzi (Rachel Weisz) who as a brain tumor that is killing her. When he uses a compound extracted from an ancient tree in Guatemala, it produces youth in the monkey and excites the scientists at the research facility headed by Dr. Lillian Guzetti (Ellen Burstyn). She is quite concerned about Tommy's working around the clock and not spending any quality time with his dying wife.

Izzi has written a book about the Fountain of Youth set in the sixteenth century, and she wants Tommy to read it and finish the last chapter. In the book's story, Hugh Jackman is the Spanish conquistador Tomas who is sent by Queen Isabel (Rachel Weisz) to find the biblical Tree of Life whose sap brings immortality. At home, she is in danger from the Inquisitor of the Catholic Church who sees her as a heretic who is a slave of paganism and deserving of execution. In the jungles of New Spain, the conquistador must face mutiny among his men, but he perseveres in his mission for the Queen. Eventually, he comes face-to-face with a Mayan shaman who believes that death is just a passage; he calls it "the road to awe."

The last story is set in the twenty-sixth century, where Tom Creo (Hugh Jackman), an astronaut, is floating in space with the Tree of Life. He is convinced that Izzy is part of the tree and that once he reaches the Xibalba nebula seen by the Mayans as an underworld, he will at last be reunited with her. Tom levitates in the lotus position and relives magical moments with Izzy.

In his three roles — scientist, warrior, explorer — Thomas refuses to see death as anything but an enemy that must be conquered. In each period, he misses the love that is right in front of him by trying to push the river and achieve miracles. Izzy is a spiritual teacher who models for him in many ways a finely finished dying. She is at peace with her passing and fearless. This worthwhile message, which is at the heart of all religions, comes across loud and clear in The Fountain and helps smooth over some of the extraneous and irritating cinematic techniques Aronofsky uses to fill out the story. 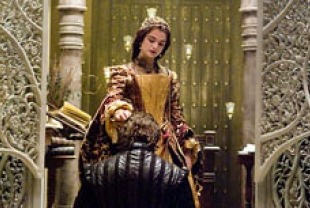 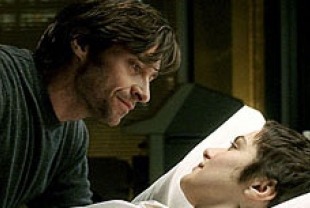 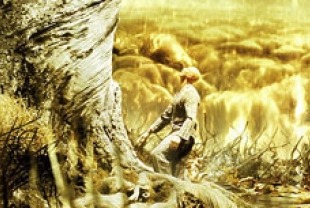 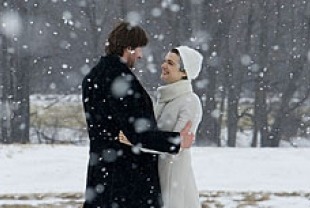 PG-13 - some intense sequences of violent action, some sensuality, language