Grbavica: The Land of My Dreams

Directed by Jasmila Zbanic
A poignant and emotionally gripping story of a Bosnian single parent struggling to survive in Sarajevo and carrying deep physical and spiritual wounds from the 1990s wars.

In the wars of the twentieth century not less than 52 million civilians have perished, many more than the 43 million military personnel killed. In addition, many survivors of the wars are in very real ways casualties of the conflicts. They may carry great pain and feelings of grief and loss for years. They may try to keep the violence they have seen and experienced hidden inside, afraid to deal with the past and its physical and psychic wounds. Recent ethnic conflicts are especially difficult for survivors who have watched the collapse of civility and the quick descent into violence animated by fear, greed, and paranoia.

In the wars in the former Yugoslavia during the 1990s, more than 100,000 people were killed. Many of them were buried in mass graves before their families had a chance to identify them. It's estimated that 20,000 women were systematically raped in Bosnia. Writer and director Jasmila Zbanic has made a poignant and emotionally gripping film about a woman who lives in Sarajevo and struggles with her nightmares and secrets from the war. This movie is the official entry from Bosnia and Herzegovina for the 2006 Best Foreign Language Film Academy Award. The power of the drama comes in its graphic depiction of the after-effects of ethnic war on the bodies, minds, and souls of those who have managed to survive but will never be the same.

Esma (Mirjana Karanovic) is a Bosnian single mother who lives in Sarajevo's Grbavica neighborhood, an area where the reminders of the 1990s wars are still visible on the streets and buildings. It had been used as an internment camp for Bosnians. Sara (Luna Mijovic), her rebellious twelve-year-old daughter, is very excited about going on a school trip. To supplement the meager income they get from government aid, Esma works in a shoe factory with her best friend Sabina (Jasna Ornela Berry) and as a cocktail waitness at night. At the nightclub, she meets Pelda (Leon Lucev), who works as a bodyguard. He is a sensitive survivor of the war who had to give up his university studies and now regularly visits gravesites in hopes of finding the body of his father.

In some of the most emotionally affecting scenes in the film, Esma visits a Women's Center that sponsors group therapy. The leader advises these traumatized Muslim women to confront the past and express their feelings. Esma, who has scars on her back from being tortured, cannot muster the courage to talk. Meanwhile, Sara becomes friends with Samir (Kenan Catic), a classmate whose father died nobly in the war. Since Esma has told Sara that her father was also a war martyr, the girl reminds her mother to bring the certificate proving his death since it will entitle her to a special discount for the school trip.

Writer and director Jasmila Zbanic challenges us to never forget that the winds of war keep blowing long after the battles have ended and the bombs stop exploding. The memories of those who have survived carry thousands of seeds of pain, suffering, and grief. Esma's reveals some secrets in a violent argument with Sara, and the two them are shocked. But we know that their love and need for each other will carry them through into a better future. 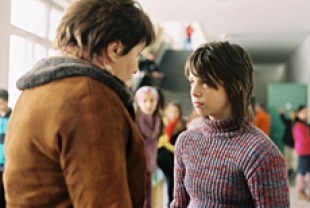 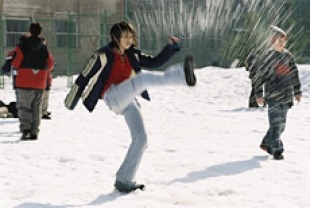 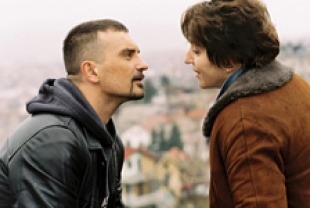 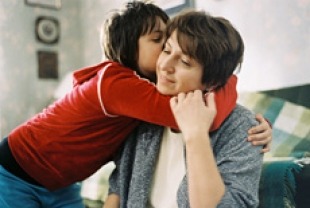