Directed by Daniele Thompson
A charming film about the yearnings of a young woman and the celebrities she encounters in her job as a waitress at a famous Paris bistro.

"Whatever the expression, everyone is ultimately talking about the same thing — an unquenchable fire, a restlessness, a longing, a disquiet, a hunger, a loneliness, a gnawing nostalgia, a wildness that cannot be tamed, a congenital all-embracing ache that lies at the center of human experience and is the ultimate force that drives everything else. This dis-ease is universal. Desire gives no exemptions." So writes Ronald Rohlheiser in The Holy Longing. Daniele Thompson directs this enchanting multi-character drama, which was France's entry in the Best Foreign Language category of the 2007 Academy Awards.

The movie is set on Avenue Montaigne in Paris, a street that bustles with activity for those interested in art, music, theatre, and fashion. The main character in this charming tale of connections is Jessica (Cecile de France), a young woman who is wide-eyed with wonder in the city. Her grandmother (Suzanne Flon), who raised her, calls Jessica "a ray of sunshine" and she does seem to have a brightening affect on everyone she meets. By luck, she lands a job waiting tables at a chic bistro on Avenue Montaigne that is the watering hole of both celebrities and ordinary people. Even though their policy is not to hire women, the manager needs extra help during a busy time of the year.

Jessica does not have a place to stay at night, but she improvises nicely with a little help from Claudie (Claudie Dani), the concierge of a theatrre across the street from the bistro. Jessica is animated by a yearning to find adventure and perhaps love. She's surprised to discover that some of the famous people she meets are yearning for something other than what they have, which would be more than enough for most people. The celebrated pianist Jean-Francois Lefort (Albert Dupontel) wants to give up the stuffy world of concerts and play for the poor, for the sick, and for those who have no appreciation of classical music. But his wife and manager (Laura Morante) has planned his schedule for the next six years. Jessica also meets Catherine (Valerie Lemercier), a very popular soap opera star who is trying to show her acting versatility in a play by Feydeau. She goes into a tizzy when she learns that an American director, Brian Sobinski (Sydney Pollack), is looking for an actress to play Simone de Beauvoir in his next movie.

Meanwhile, the wealthy art collector Jacques Grumberg (Claude Brasseur) is putting all his possessions up for sale at an auction house. His son Frederic (Christopher Thompson), a teacher and writer whose speciality is religious wars, does not approve of his father's pretty young mistress (Annelise Hesme), whom he regards as a gold digger. The two men reminisce about the past and the disappointments of life. Of course, the auction will make Grumberg senior even more rich since his collection includes amazing works of art.

Avenue Montaigne is a French film that is easy to like: the actors and actresses glide through the movie emitting charm and wit. Paris is very appealing to the eyes, and the music selections draw out our emotions. If you are going to make a movie about the yearning of ordinary people like Jessica as well as the desires of the rich and the famous, you might as well do it with style! Thompson succeeds admirably.

Special DVD features include the theatrical trailer and behind the scenes making of Avenue Montaigne. 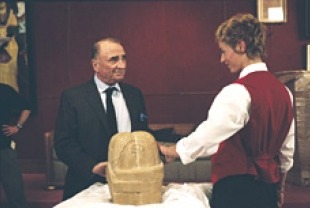 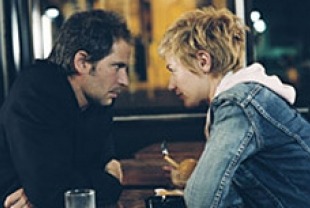