Directed by Ritu Sarin, Tenzing Sonam
A well-realized drama about Tibetans living in exile in India and their quest to find meaning.

Karma (Tenzin Chokyi Gyatso) is a filmmaker from New York who is in Dharamsala, the Dalai Lama's headquarters in India, making a documentary about former political prisoners who escaped from Tibet. One of the people interviewed is Dhondup (Jampa Kalsang), an ex-monk who spent four years in prison where he was tortured by the Chinese. One day he tells Karma that he needs her help on a mission he promised his mother he would fulfill. She gave him a charm box to be delivered to Loga, a resistance fighter who left Tibet and has not been seen for more than 15 years.

Karma agrees to help Dhondup, much to the dismay of Jigme (Tenzin Jigme), her Tibetan assistant on the documentary. Even though he knows that she has a relationship with a man in New York, this easy-going guitar-player has romantic feelings for her. Jigme is very close to a Tibetan who is on a hunger strike in Dharamsala as a protest against the Chinese occupation of his homeland. Yet at the same time, Jigme harbors fantasies of a new life in America.

This is the first dramatic feature film by documentary filmmakers Ritu Sarin and Tenzing Sonam. The quest of Dhondup and Karma leads them to visit Loga's former wife, a monastery, a restaurant in New Delhi, and the hills above Dharamsala where hermits live. Karma is also a Tibetan who feels deeply the suffering of her people and is doing the best she can to make their plight known to the world. Dhondup bears in his body the marks of his suffering and yearns to return to his homeland, even though 2000 of his fellow Tibetans are fleeing the country every year.

This film conveys the dislocation the main characters feel in a world where their concerns are not part of the consciousness of the West. Although pictures of the Dalai Lama adorn the walls of many houses, he is only glimpsed briefly as he waves to the crowds from a passing car. Still his spiritual presence animates the movement to free his people and that yearning is palpable in the main characters in this well-realized drama.

Special DVD features include the making of the documentary, interviews with the filmmakers, a short film: rights. . .& wrongs, film notes by Human Rights Watch, and the directors' notes and biographies. 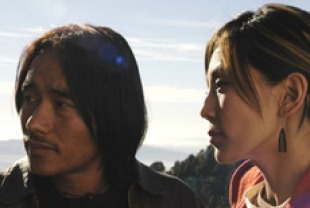 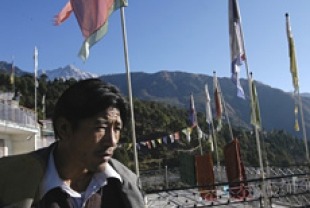