Directed by Judd Apatow
A mega-laugh comedy about the messiness of change with lovable characters whose humor and humanity make them very appealing.

This mega-laugh comedy combines bawdiness and slapstick sequences with characters who are flawed but lovable in their attempts to deal with the messy changes of life. Judd Apatow (The 40-Year-Old Virgin) proves that his comic talent as a writer and director is no flash in the pan. Knocked Up is the funniest film of the year and ranks right alongside Meet the Parents and There's Something about Mary as a comedy classic!

Ben Stone (Seth Rogen) is a happy slacker from Canada who lives with his four buddies in a state of contented bliss. They smoke dope, watch and talk incessantly about movies, and dream of setting up a web site called fleshofthestars.com listing the exact times when movie stars appear nude in DVDs. One night at a Los Angeles club, he bumps into Alison Scott (Katherine Heigl) at the bar. They both get drunk and dance the night away much to the amusement and envy of his buddies who can't believe their eyes to see Ben with such a looker. They go to Alison's place and have sex. In the morning, these strangers can barely remember the previous evening. But eight weeks later, Alison realizes she might be pregnant.

This shocking development throws her for a loop since she has just landed a lucrative promotion as an on-camera correspondent for E! Entertainment Television. Alison lives with her older and domineering sister Debbie (Leslie Mann) and her husband Pete (Paul Rudd) who have two young children (Maude and Iris Apatow). This couple is going through a bad patch in their marriage: Debbie suspects Pete is having an affair since he is constantly scheduling evening meetings which he says have to do with his job.

Alison calls up Ben and tells him he has to go to the gynecologist with her. There they learn that she is indeed pregnant. Both of them are stunned, Ben more than Alison. But unlike many other males in the same situation, he decides to do the right thing and be supportive. Of course since he has no job and is broke, this is the best he can do.

One of the many endearing things about Knocked Up is that director Apatow doesn't look down on any of his characters. This applies especially to some minor characters in the story. Let's take just three of them. Ben and his two roommates mercilessly rib Martin (Martin Starr) for growing a beard and looking like a freak. He doesn't like being ridiculed but manages to handle it quite magnificently. That also goes for an African-American doorman at a posh club who is verbally attacked by Debbie when he refuses to let her and her pregnant sister skip ahead of the others in line. Instead of ending the scene with Debbie going ballistic, he allows the doorman to express his opinion about being embarrassed by management's policies about whom to treat special and maintaining a quota for black people. Finally, there's the brusk Oriental doctor who at first is very insensitive to Alison requests about her birth plan and then changes his perspective after talking to Ben.

The heart and the soul of Knocked Up are the sensational performances by Seth Rogen and Katherine Heigl as a couple forced to deal with changes in their lives that come with her pregnancy. There is great humor and humanity in both of their performances. The difference in their lifestyles surfaces early, and Alison is very critical of Ben. She rides a rollercoaster of emotions as her body changes, and Ben struggles valiantly with the challenges of growing up and accepting the responsibilities and commitments of impending fatherhood. Both kick and scream, and we identify with them every step of the way. All of these ingredients combine to make Knocked Up one of the best films of the year. 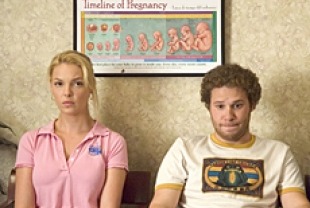 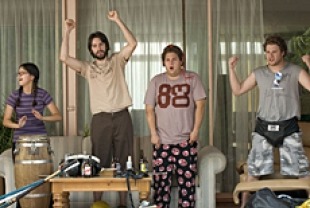 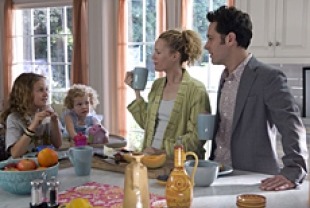 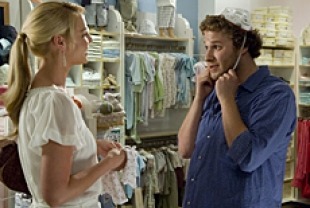 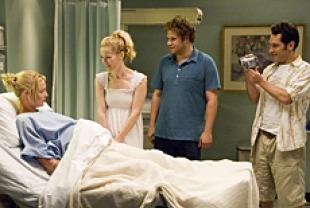