Directed by Luc Besson
An intriguing drama about a quirky leggy blonde angel who comes to Paris on a mission of mercy to show a self-destructive and petty man his worth.

Modern movies have depicted the mystery of angels in a wide variety of ways. The best one remains Wings of Desire directed by Wim Wenders. Bruno Ganz plays Damiel, an angel who has spent an eternity watching over the affairs of men and women. The more he comes into contact with the human adventure, the more he yearns to savor the palpable pleasures of a worldly existence. So Damiel takes the leap of faith and sheds his wings.

The sequel, Faraway, So Close! charts the experiences of another earth-bound angel, offering an imaginative look at the interplay between these other-worldly beings and human beings. Nora Ephron's comedy Michael revolves around an archangel who has a great set of wings, smokes, loves sugar, makes women swoon, and believes laughter is "the way to true love." A more traditional approach to angels is seen in The Nativity Story.

In Angel-A, French director Luc Besson (The Messenger: The Story of Joan of Arc has come up with his own phantasmagorical tale about an other-worldly being visiting Earth on a mission. This black-and-white film, which makes the most of stunning images of Paris, revolves around Andre (Jamel Debbouze), a one-armed petty criminal who is in big trouble with a number of gangsters and wheeler dealers. They have sent their musclemen to force him to pay his debt. One nasty fellow has his men dangle Andre off the Eiffel Tower. Frightened to death, this vagabond visits the U.S. Embassy seeking help and gets none. He unsuccessfully tries to have the police put him in a cell overnight but that doesn't work either.

Poised to commit suicide by jumping off a bridge into the Seine, he watches as a leggy blonde beats him to it. He plunges in the water and saves her. It's quite a while before Andre realizes that Angela (Rie Rasmussen) is really an angel on a divine mission to save him. He has a bad case of self-hate and has never known love. Angela does all she can to convince him to see himself afresh but old habits die hard. Together they visit his creditors, and with her own creative abilities, the angel helps him get rid of his debts. Only trouble is that Angela has her own nagging problem: she doesn't know a thing about her past life and it bugs her no end.

Besson has a few surprises in store for us in this drama but there is far too many scenes in Angel-A where the two protagonists are shouting at each other. Andre is a totally unlovable person stuffed with flaws that all stem from his lack of self-esteem. Angela works wonders with her counsel and positive presence in his woeful and self-destructive life. 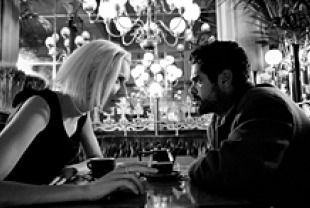 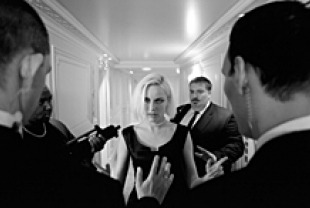 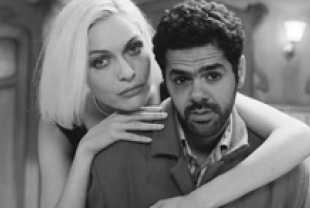