Directed by Steve Zaillian
This David versus Goliath courtroom drama has just the right mixture of legal debate and emotional vibrancy.

This fascinating film is based on a best-selling book by Jonathan Harr on the real-life experiences of Jan Schlichtmann, a small-time personal injury attorney. It focuses on the case that turns him from a greedy ambulance-chaser into a zealous crusader for the truth. He goes to battle against two of the nation's largest corporations on behalf of some working-class families in Woburn, Massachusetts, who claim the companies contaminated their town's drinking water with chemicals — resulting in the deaths from leukemia of eight children.

Writer and director Steve Zaillian (Searching for Bobby Fischer) unspools this David versus Goliath courtroom drama with just the right mixture of legal debate and emotional vibrancy. John Travolta gives a nuanced performance as the lead character, a man whose pride plunges him into financial catastrophe but whose unflinching search for justice is exemplary. On an emotional level, Schlichtmann's story is about the spiritual power of transformation; this case changes the lawyer's life in both obvious and subtle ways.

The supporting cast in this legal thriller is excellent. Robert Duvall gives a stellar performance as a tenacious trial litigator whose idiosyncrasies cover up his ferocious talent. Tony Shalhoub and Zeljko Ivanek play Schlichtmann's law partners. William H. Macy is the firm's flustered accountant. And Kathleen Quinlan stars as a mother in Woburn who wants an apology from someone for the untimely death of her young son. 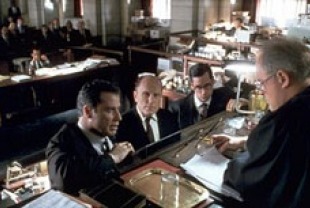